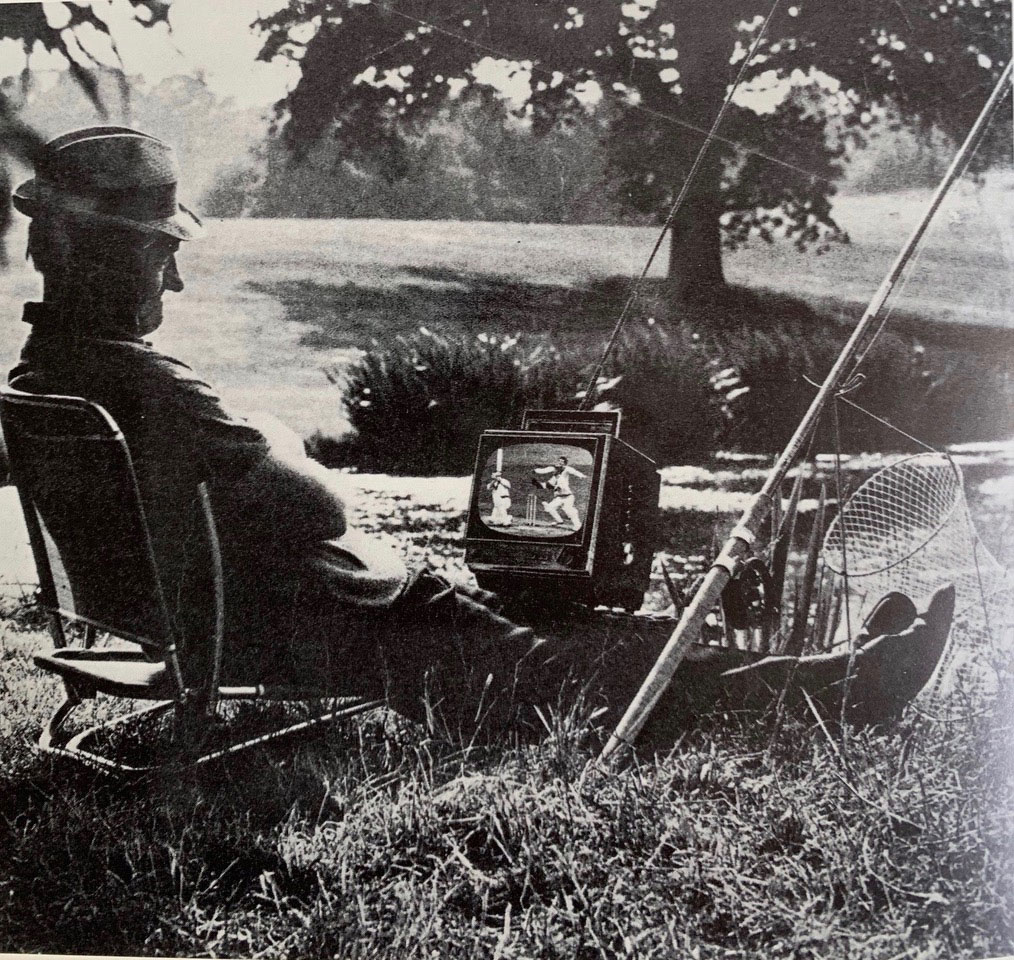 Since the dawn of time and throughout history, men have invented and conceived their seat according to customs, styles, eras and of course the creators! Very quickly, seats started to play an important role in the societies. For certain, they have become symbols accompanying power, in many different forms, and for others, symbols of contestation. Great cabinetmakers and craftsmen, sometimes families of creators quickly positioned themselves to create essential pieces, or their own unique style. For some of them, seats have become pieces at the frontier between a work of art and a piece of furniture. To develop better on the subject, all these points need to be presented in pictures.

However, the reversals of the concept of « beautiful » in furniture have led some creators to move towards a more functional research for seating. Isn’t it important to have dinner sitting on comfortable chairs, to read comfortably on a good sofa, or to work sitting in a position that suits us?

Like many designers, Jean Prouvé, when creating his seats, said: « I have always had this concern for well-made construction ». So let’s set off to discover the evolution of this essential and iconic piece of furniture!

The exhibition at the Museum of Decorative Arts in Paris: « Les Assises du siège contemporain », during the demonstrations of May 68 … This retrospective thus made it possible to discover and understand the important place that the seat has always had in different societies, during the XXth century.

Since forever, the seat needed above all to be comfortable for all of us. But everyone has its own perception of comfort !

… Jean Royère understood it really well in his creations – with, among others, the ‘Polar Bear’ sofa.
The sinusoidal shape, so dear to the decorator, is deployed here to achieve a certain ideal of comfort, essential for its creator!

In history, Queens and Kings have always sought to position themselves higher than the Court, and even between different Courts, by having royal furniture that is different from the others, in order to reinforce their legitimacy.

For some, the ascent, power and success, require to be represented sitting on a throne of gilded wood and ivory, as illustrated by this famous painting by Jean-Auguste Dominique Ingres, Napoleon seated in majesty on a throne from Jacob!

While notable or wealthy traders show their social superiority by being transported in sedan chairs: ancestral Chinese tradition!

At the end of the 1930s, Jacques Adnet designed his furniture by moving towards a more classic but revisited style, which takes the form of XVIIth century furniture: French tradition, but with his own modernity.

But Kings, princes, the bourgeois, as well as art lovers have also sought luxury in contemporary creation of each era.
As in Jean Royère’s « Ambassador » armchairs, made for the Shah of Iran cinema theater around 1958.

Furniture can also be sculpture… Throughout the XXth and XXIth century, designers have created furniture, seats, objects related to culture and intellectual revolutions of the moment, as with this incredible armchair: seat / work of art from the Monolith Group, 1986.

In the XIXth century, in Germany, it was the Thonet Family who invented new, sculptural forms, especially with the use of bent wood.

At the start of the 20th century, a new style was invented with one of the undeniable masters of that time: Antoni Gaudi! With Gaudi, the main representative of what is called Catalan modernism, the furniture is integrated into an already specific interior design. At Casa Batllo, the seats take up an organic form. His creations, based on the observation of nature, are always undulating and don’t have any right angle.

Others, such as Jacques-Émile Ruhlmann, designed luxury lounge chairs in the 1920s, including this one, known as the « ski lounge chair » in 1929, for the Maharajah of Indore.

In the post-war years, in France, some of the 60s and 70s designers believed in total utopia, wanting to transform the world… like this interior project for an airport hall by Bernard Govin!

But the Italians are also very strong !

They create serial furniture like this “Pratone” chair by Pietro Derossi and Giorgo Ceretti (1966). 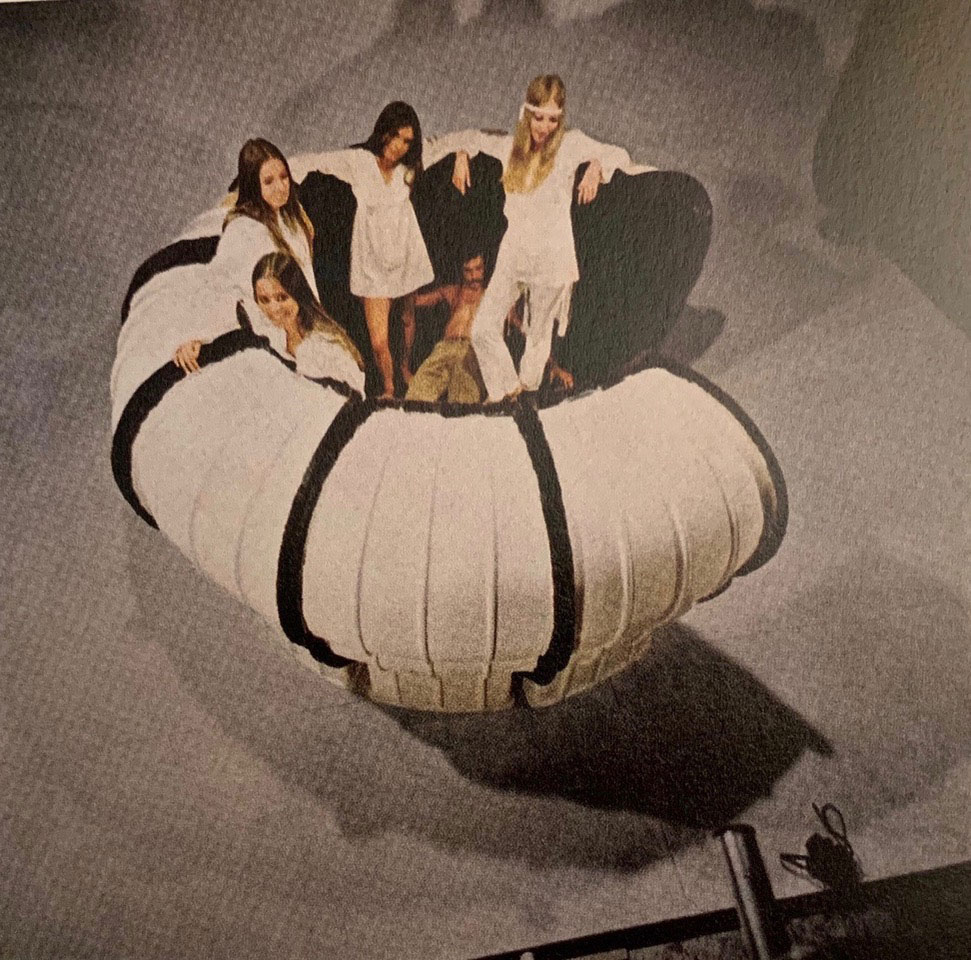 Or Superstudio, an architect agency from Florence, that create “Bazaar” sofa around 1969. 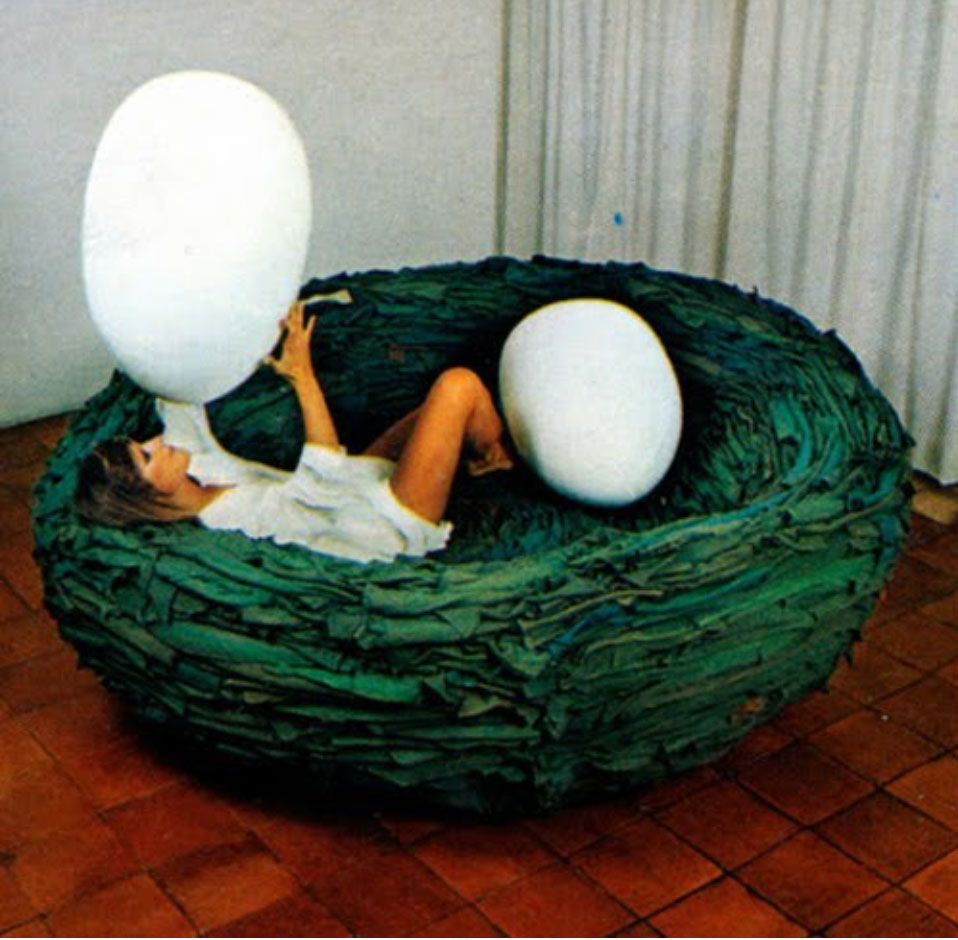 ‘Dalila’ chairs by Gaetano Pesce, designed in the beginning of the 80s.

Or the ‘Animali Domestici’ (1985) series by Andrea Branzi, with it radicality.

The Japanese, for their part, by using materials, such as paper or plastic, have a more poetic approach, as for these two seats by Yoshioka Tokujin (2001).
As usual, they combine technological innovation and centuries-old tradition, for an ever more innovative design.

Let’s also not forget Ron Arad’s style, unique in his kind, which marked the entry into the Design of the 21st century in the early 90s! 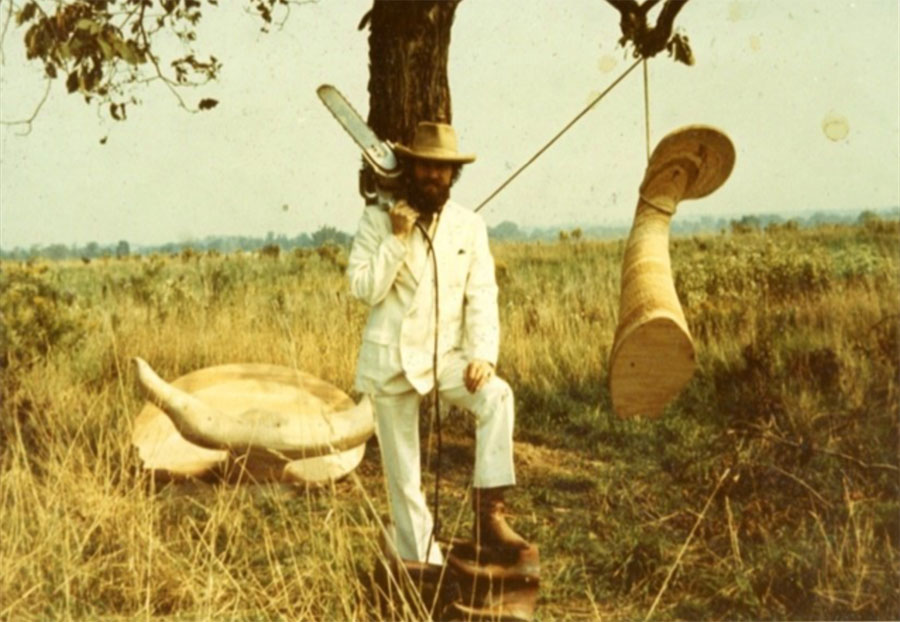 … As well as Wendell Caste and his truly sculptural forms !

But sitting must first of all be functional and it especially starts at school!

In the United States, Functionalism appeared at the beginning of the XIXth century, within the Shaker community. One of the sources of reflection for this New England community is that the furniture must be a useful, vital, stripped of any decoration or ornamentation, because otherwise it would impose an unwanted social positioning!

In the 1920s, French modernism already had its masters who would mark the XXth century. For Le Corbusier, Pierre Jeanneret and Charlotte Perriand, it is about designing minimal, functional furniture created from metal tubes. The lounge chair follows the position of the body at rest. For better comfort, it can be positioned depending on whether you want to read or sleep! 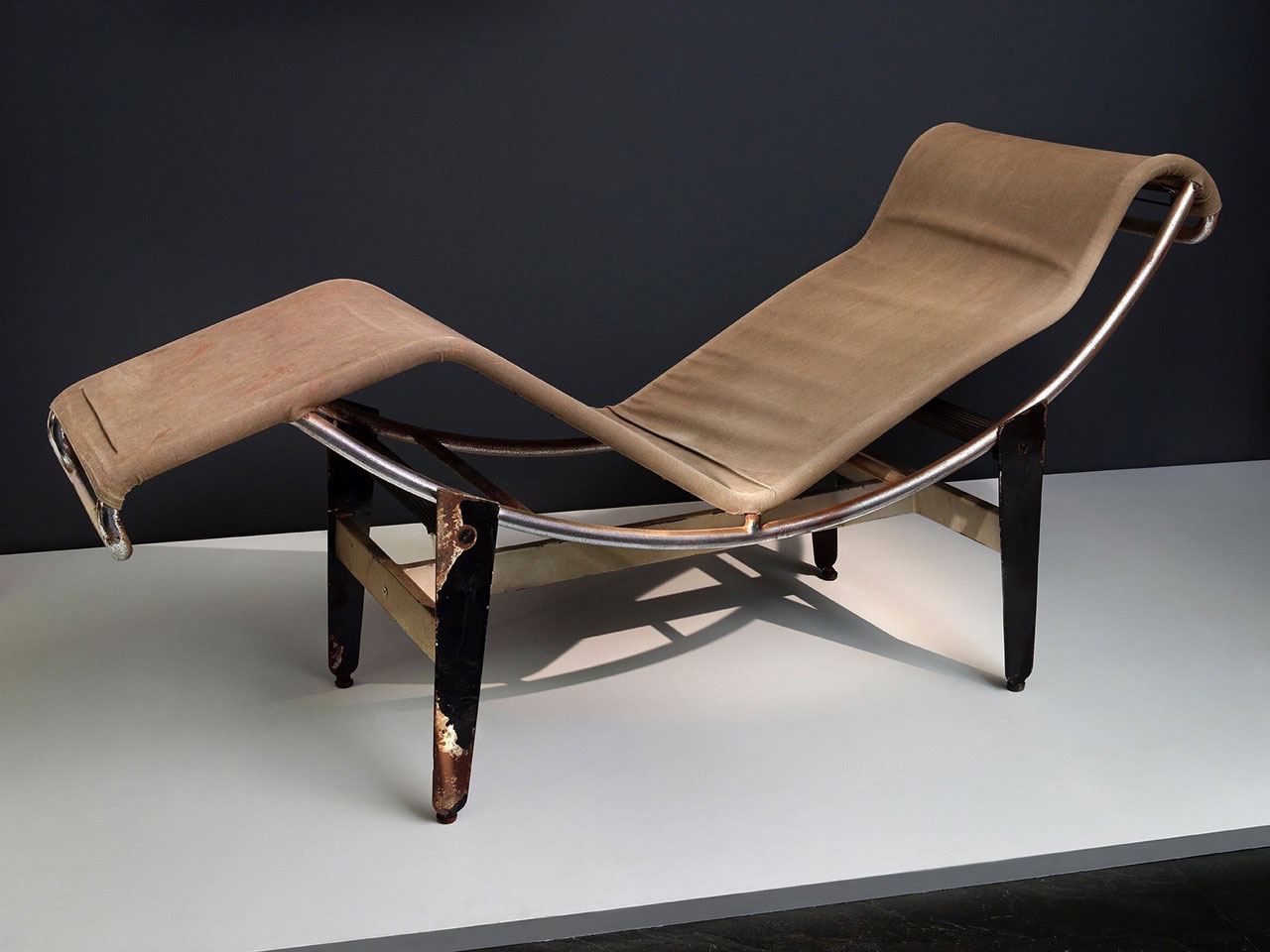 In this spirit, this tube armchair was produced at the same time, by Le Corbusier, Pierre Jeanneret and Charlotte Perriand and presented at the Salon d’Automne in 1929, in ‘a modern interior’. It marks the mutual attachment to modernity, characterized among other things by the founding of UAM (Union des Artistes Modernes), the same year.

… Another essential figure of the French design, from the 1930s to the 1950s: Jean Prouvé. He seeks above all the development of mass production. His so-called “Standard” chair, as well as aluminum stool, were to become iconic pieces.

At the same time, Pierre Jeanneret moved to India, to follow the construction of the city of Chandigarh, carried out by his cousin, Le Corbusier… He was also entrusted with the interior of the buildings, for which he will create a functional, simple and refined furniture, with the use of local materials, such as teak or cane.

The 80s mark the continuity of the French tradition which is to create by following its time but with a new rhythm, like that of Philippe Starck.

President of the Republic, like the Pompidou and the contemporary rearrangement of the Élysée Palace, realized by Pierre Paulin

Intellectual and collector, like the couturier Jacques Doucet and the interior design of his hôtel particulier, with the seats by Pierre Legrain, among others.

With some friends, at home

Or all alone, in the midst of others,

or all alone, at home

Or by two, in a public garden

Finally, the seat is important – or even essential – in everyday life because, as the philosopher Alain emphasized: « Everyone thinks according to the nature of the seat they are sitting on ».