Undeniably, this period of quarantine offers us a great thing, which has become rare in our fast-paced daily world, the time! Let’s thus plunge back without any guilt into the Seventh Art. New Wave films, comedy or satire from the 70s, futuristic epic from the 2000s or contemporary blockbusters, all have one thing in common: a setting that allows you to see beyond the four walls of our house, and to escape .

Cinema is a crazy land of freedom, we invent, we experiment, we compose! It is also a field of creativity. From the 1920s to today, the decor has the mission to captivate us, to inspire us! The furniture then plays a leading role. Objects can produce action themselves; they can add meaning to the plot, becoming a real character in their own right. Relations are therefore a two-way street, cinema needing design for the decor, and design sometimes drawing inspiration from cinema to tell a story. And when the two disciplines combine perfectly, it creates masterpieces of cinema and design. 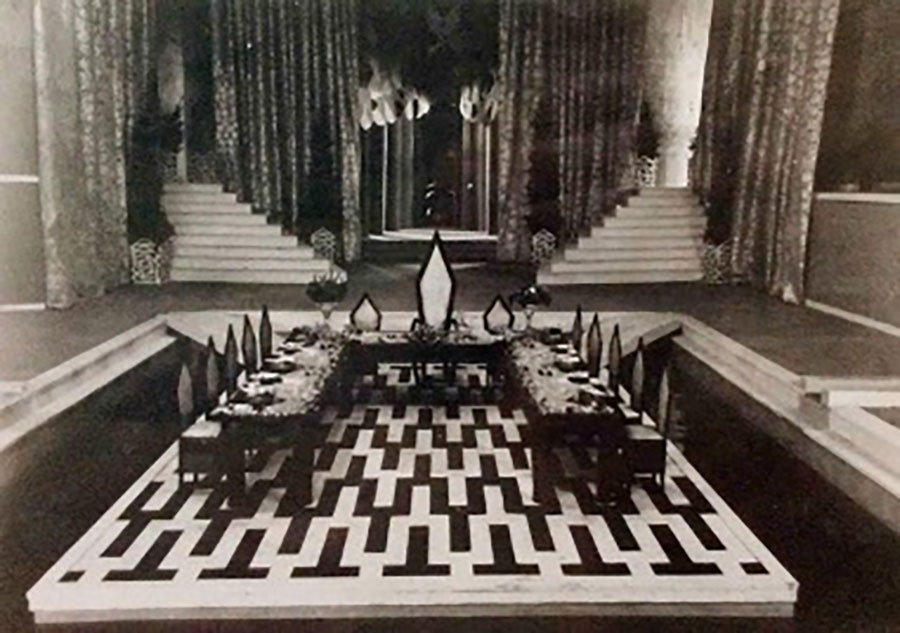 He is a key figure in French cinema, and yet a large part of his work remains unknown. In the 1920s, Marcel L’Herbier shot L’inhumaine, a drama with an innovative style, both in its narration and in its form! Better than a film, it is the embodiment of the avant-garde which characterizes these years, a mirror of modernism which agitates society. Dazzling symmetry and cubist decorations signed by big names of the time such as Robert Mallets-Stevens – militant of modernity and first permanent decorator of cinema – or Pierre Chareau.

« I prefer to show my inventions to the crowds of cinema than to the only friends and mistresses of the club who would use my offices ». (Robert Mallets-Stevens) 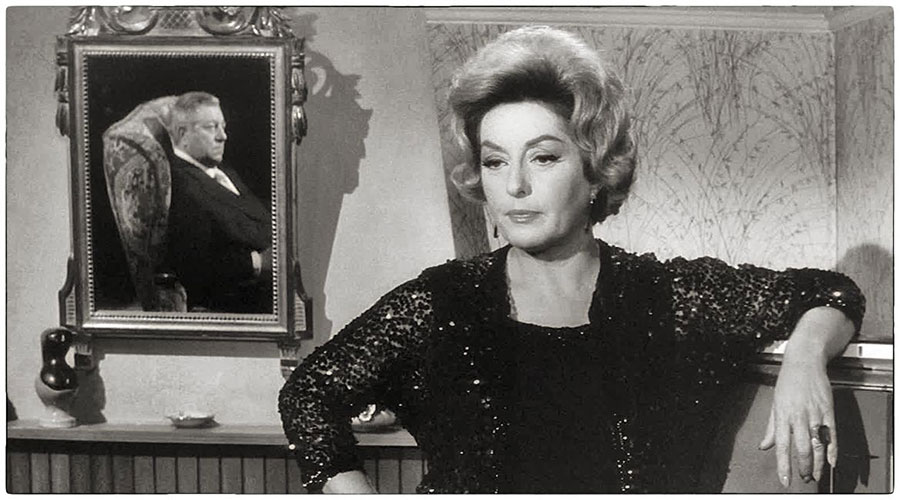 This masterful thriller combines two generations, by staging an old crook played by Jean Gabin, and a young man with an almost insolent physique, embodied by Alain Delon. Genius script, as the story is breathless, and the staging is done to the last detail. This film also gives us to see – through its precisely thought-out decor – a certain conception of life and society, putting in parallel wealthy people evolving in a very chic sixties, and bandits having only one desire, rob them. 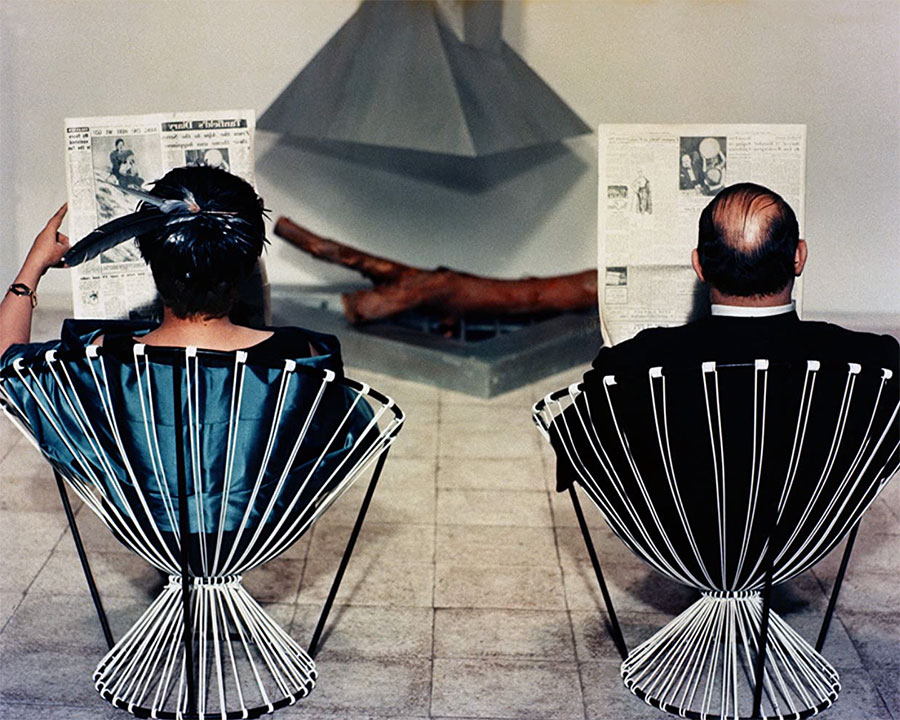 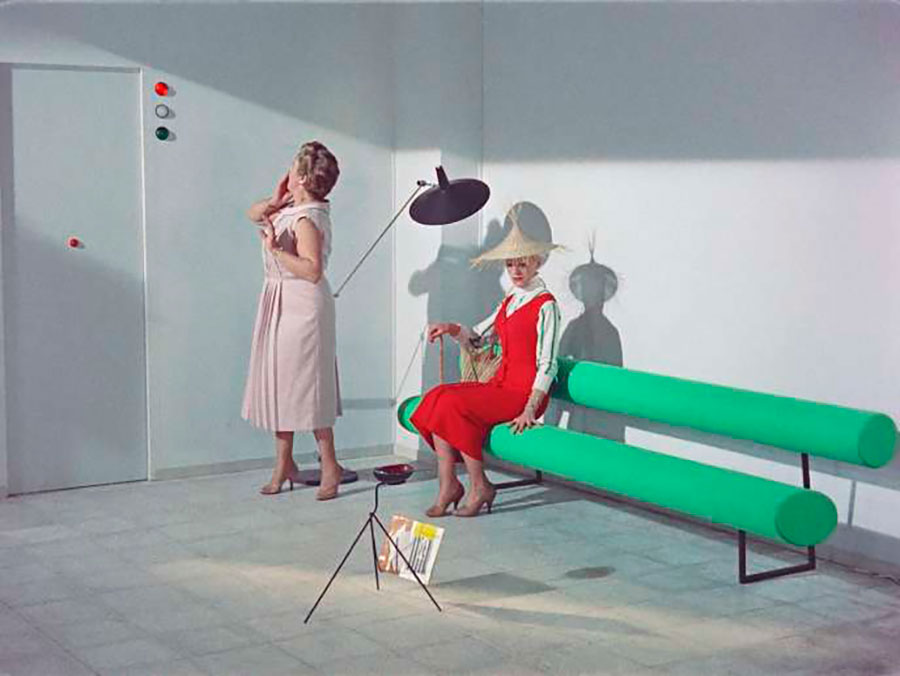 This major film was in a way the « manifesto » of the film-design, since the furniture was invented for the film, by the filmmaker Jacques Tati himself, in collaboration with Jacques Lagrange. Having become cult objects since, then were even edited in 2005 by Domeau & Pérès, We should note, however, the appearance of a few important guests in the decor, such as the Scoubidous armchairs by Pierre Guariche, Michel Mortier and Joseph Motte (Plastic Research Workshop), the sconces by Serge Mouille and the ceramics by Pol Chambost. « How original! Can we sit?  » exclaims the neighbor who came to admire the heroine’s residence. 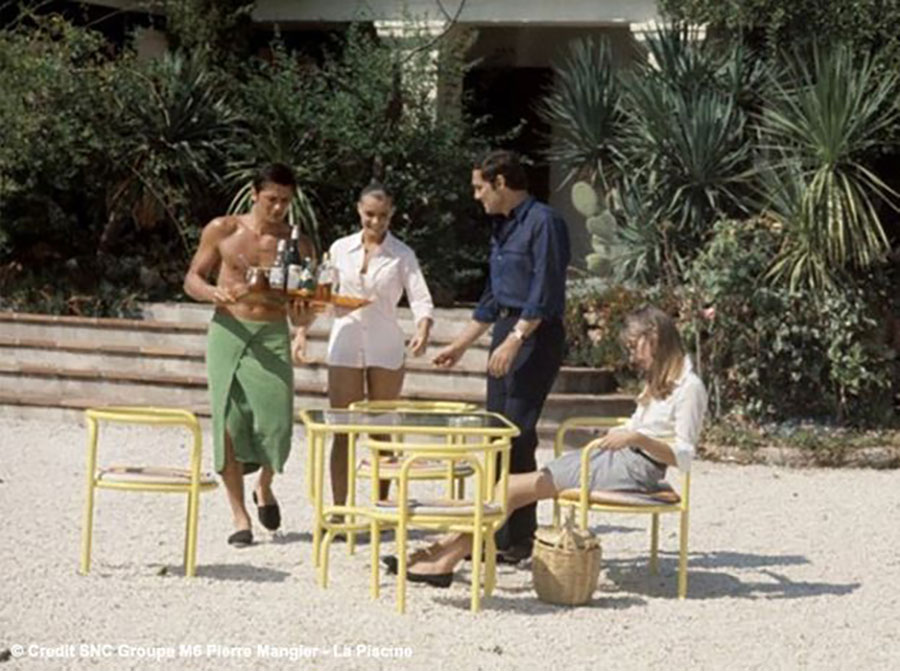 The casting of this film is already a promise in itself: Maurice Ronet, Alain Delon, Romy Schneider and Jane Birkin, staged in a summer setting. The synopsis is simple: The vacation of a couple in a superb villa in the heights of Saint Tropez is disrupted by the arrival of friends, causing confusion on the nature of their past relationship … The Swimming Pool is one of the films that you can see countless times, for the magnetic beauty of its actors, but also its aesthetic sensuality that emerges from the image. Everything invites to relaxation: a huge deckchair signed Roger Tallon, or a yellow Locus Solus garden furniture by Gae Aulenti, but the decor also takes part in the action, the swimming pool becoming « fatal »!

« A decor is a great dramatic emotion ! » (Louis Jouvet, director)

Between the New wave and Pop culture, the 60s will offer viewers a prolific film-design scenery. In Oscar, Pierre Paulin’s Mushroom armchairs perfectly illustrate the public’s idea of a “modern” existence, and of the notion of originality and novelty among the wealthier classes. Louis de Funès’ apartment becomes the perfect showroom of the best of the sixties! Staged in 1967 by Georges Wakhevitch and Jean Forestier, Oscar‘s decors are a mine of contemporary design.

Stanley Kubrick understood the importance of decor early on, and paid particular attention to the choice of pieces of furniture. He draws on avant-garde and futuristic collections from the 1960s to present design pieces by the great names of the time. For the 2001: A Space Odyssey film, he brings together no less than 35 decorators! The famous white lounge of the spacecraft V is furnished with undulating red seats, from the « Djinn » series, designed by the French designer Olivier Mourgue and produced by the company Airborne International. The clear red impeccably contrasts with the stellar white of the decor. In the middle, one-legged tables, now iconic: the famous Tulip created by Eero Saarinen in 1956 and produced by Knoll. A year earlier, in Casino Royale, Peter Sellers was doing gym exercises on the same model’s lounge chair, dressed in pink for the occasion, according to the wishes of Ursula Undress. 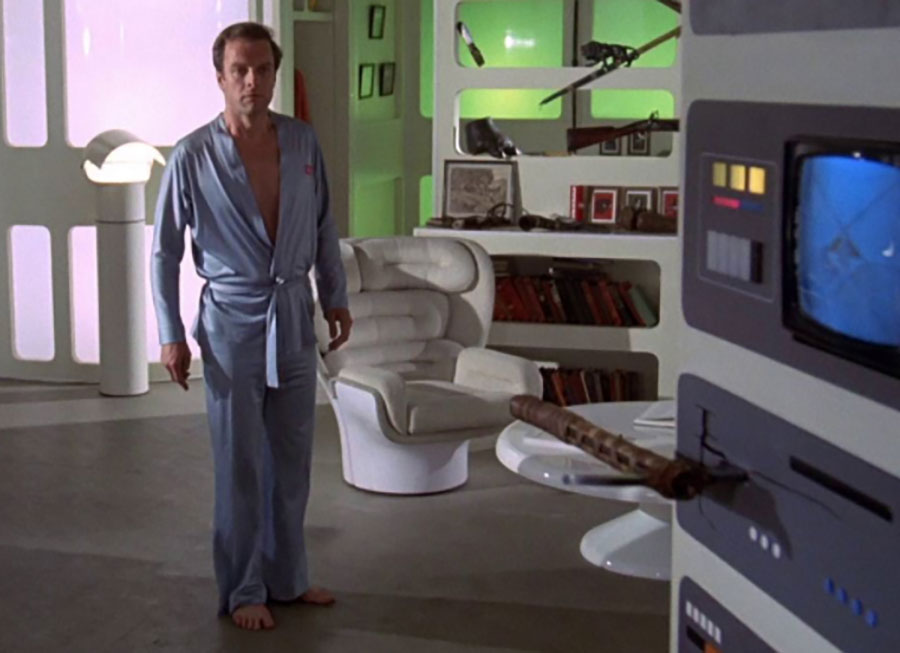 Emblematic creation of Joe Colombo, the Elda armchair (named in homage to his wife) presents a revolutionary silhouette, both comfortable and innovative in terms of materials. Its surprising avant-garde form earned it definite cinematic success, notably in the Space 1999 series, or in the film Hibernatus by Edouard Molinaro (1969), below. More recently, he will also be the star of the Hunger Games saga (2012), proof of his timelessness. 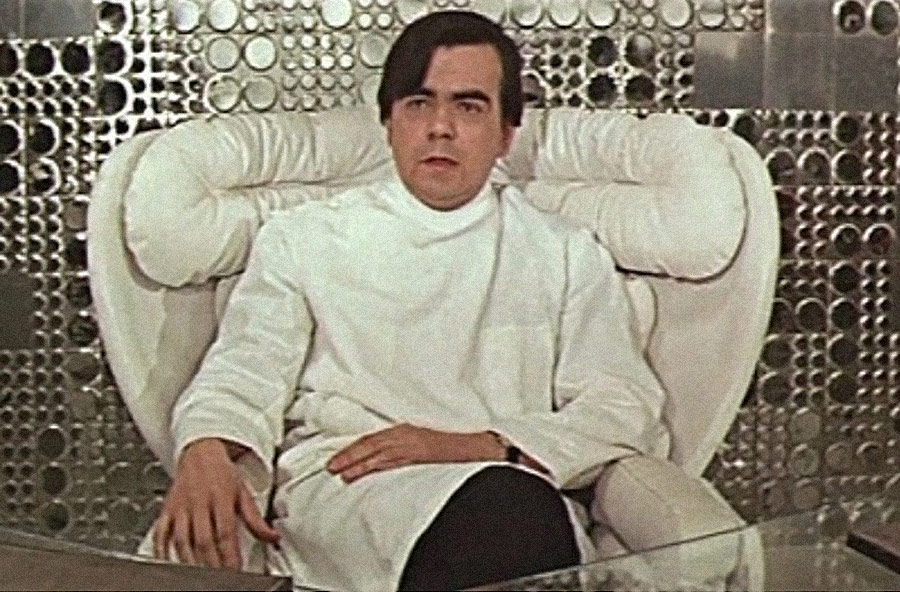 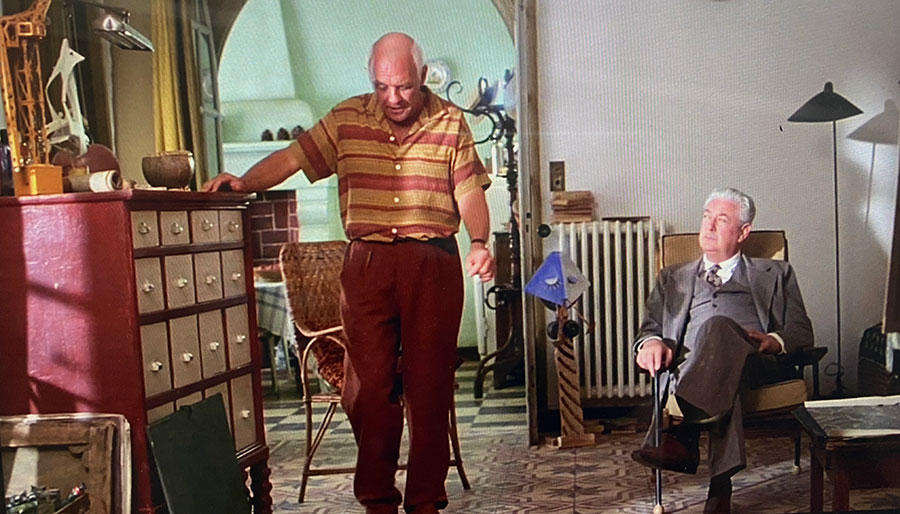 This legendary film tells the fused and passionate story between Pablo Picasso and Françoise Gilot, from 1944 to 1953. It all begins shortly before the Second World War, under the roofs of Paris, when Picasso receives the visit of two young and pretty art students. One of them lets herself be seduced by the great genius. There are many biopics dedicated to the painter, but this one will has the merit of devoting a great deal of space to interior decor. There are many design quotes from this post-war era: Standard chairs and Visitors armchairs by Jean Prouvé, lighting by Serge Mouille and other major pieces from this period. It is interesting to mention that the family refused to lend originals of the artist for the shooting, because of the too free interpretation of the decor of the artist, the director was therefore forced to order many copies for the film. 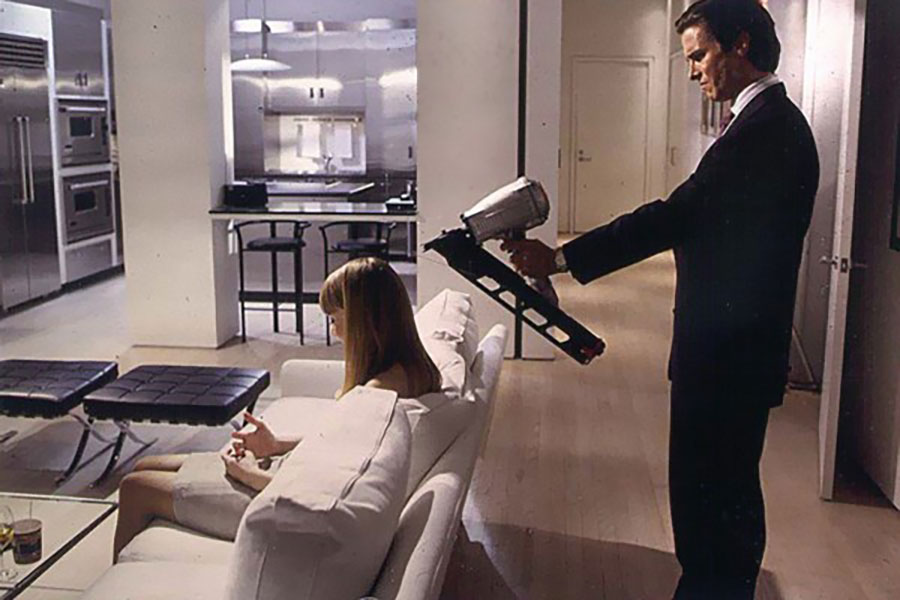 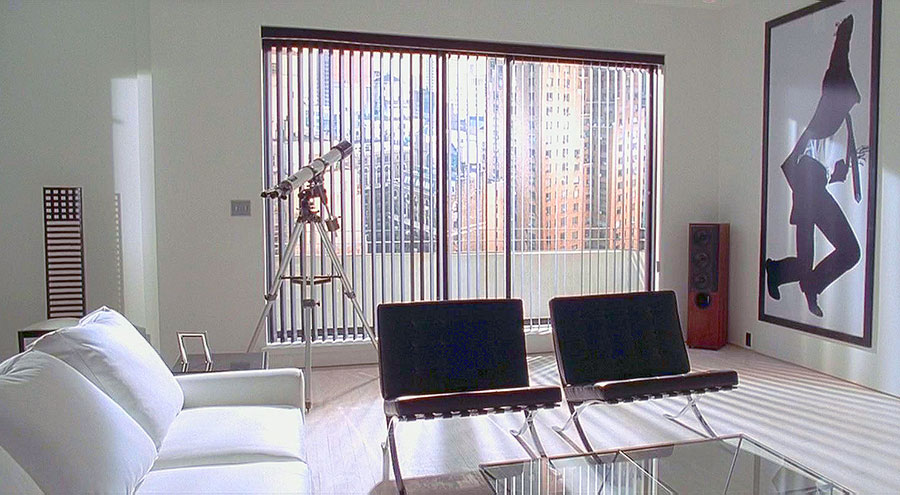 The Oscars of screen presence undoubtedly goes to the Barcelona model by Mies Van der Rohe. Staged in the freezing apartment of the golden boy and hero embodied by a demonic Christian Bale in American Psycho, the set strongly contributes to the anxiety-provoking atmosphere of the film, the already very minimalist space transforming into a real operating theater for the scenes of crime. This model will then be used in many office decorations, seeming to establish the legitimacy of its owner, since, furniture is also a means of confirming social status. It will also be visible in the film Casino Royale by Martin Campbell in 2006 (below). 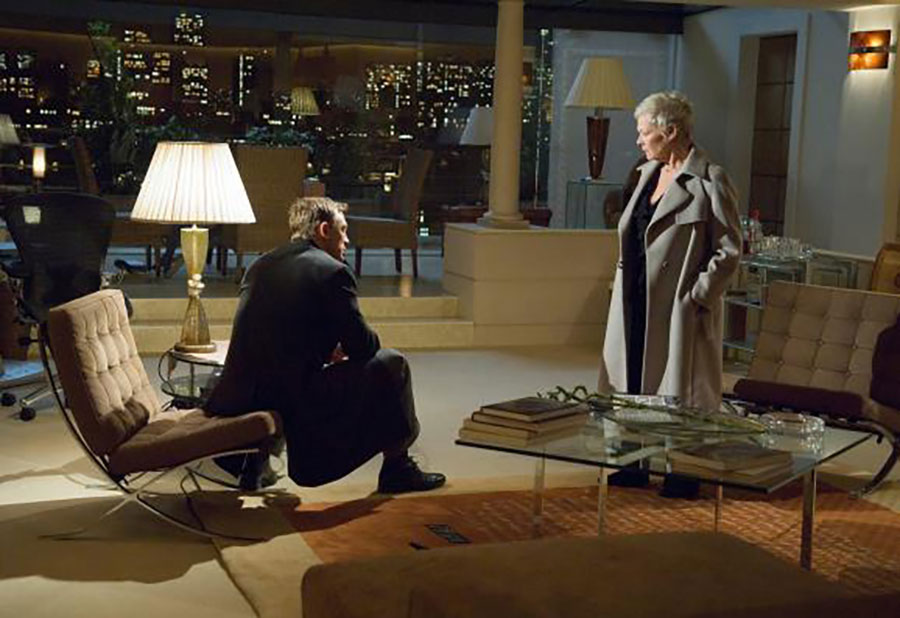 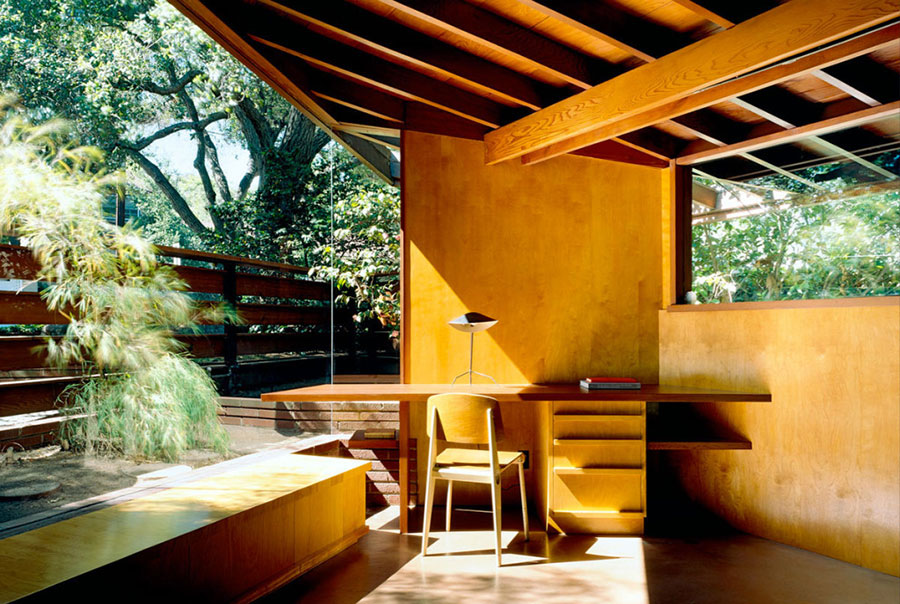 The villas designed by American architect John Lautner (1911-1994) are a cinema classic, a fantasy on the big screen. They are much more than just film sets. They accompany the intrigue, giving meaning and depth to the everyday life of the protagonists. The Shaffer House, built in 1949, is no exception. In the heart of the mountain, under a majestic oak tree essential to the intrigue, it accompanies the tragedy experienced by the main character. Called “glass house” by its fictitious occupants, it is very simply furnished with creations from the 1960s, such as removable Standard chairs by Jean Prouvé or lighting by Serge Mouille. For the occasion, Tom Ford even received expert advice on post-war furniture. 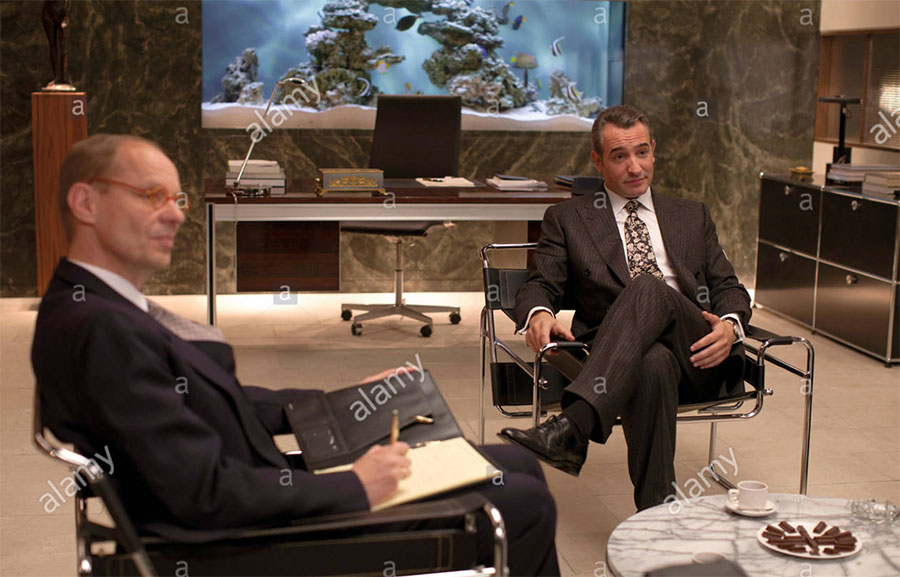 Adapted from the book by Jordan Belfort, The Wolf of Wall Street is about the rise and then the descent into hell of one of the largest stockbrokers of the late 80s. The plot takes us through a succession of delirious scenes of the protagonists addicted to money and sex. The spectator then enters a little-known universe, and the decor is essential: between New York penthouse, villas and yacht, everything is done to accentuate the splendor and the absurd of the lives that unfold there. A memorable scene, between the main character and a Swiss banker (Jean Dujardin) highlights a flagship set of design from 1925-1926: the Wassily armchairs by Marcel Breuer. 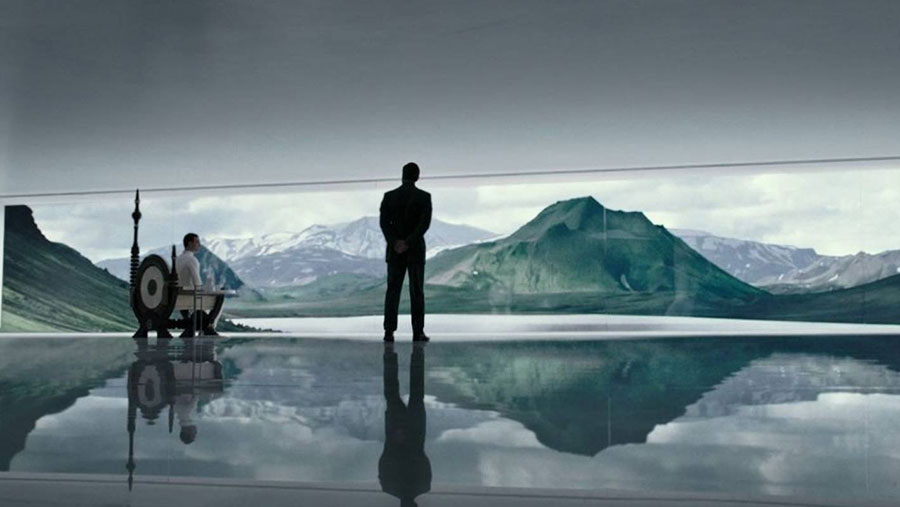 Ridley Scott, contemporary American director, is – among other things – renowned for the quality of his sets and his incredible application in enveloping the spectator in a « global » cinematography experience. Here, in a house set in the middle of a lake, Michel Fassenberg sits on a seat by Carlo Bugatti (designed by the Italian artist in 1905), placed next to an E1027 coffee table by Eileen Gray. This juxtaposition of two styles so different pushes the limits of classic codes and demonstrates the creativity of the director, anxious to create a blatant aesthetic contrast. 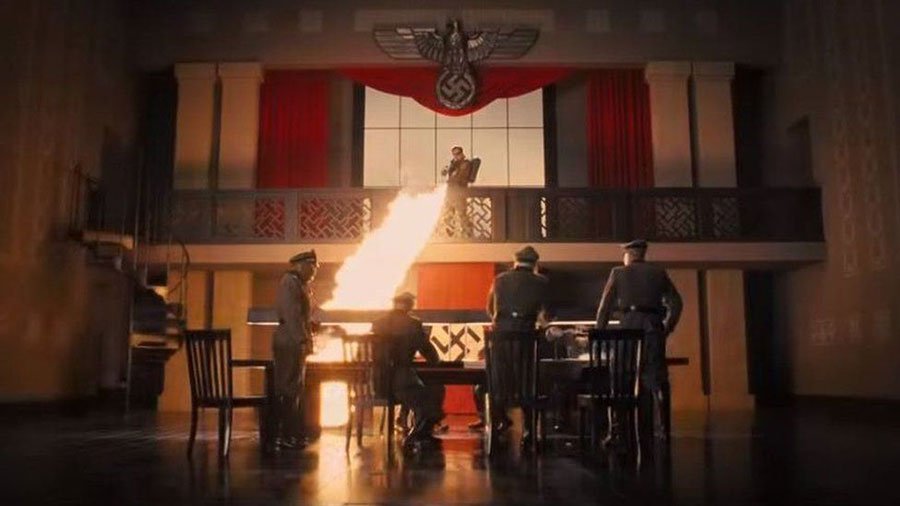 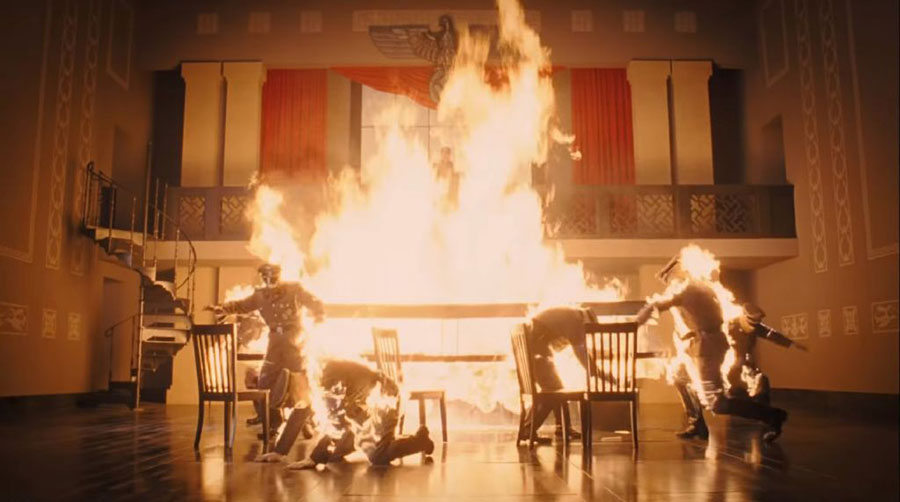 How can we talk about contemporary cinematography without mentioning Hollywood’s enfant terrible Quentin Tarantino! The famous director of Pulp Fiction and Kill Bill, he releases in 2019 Once upon a time in Hollywood, his ninth film dedicated to the American film industry which takes place in Hollywood in the 70s. With lots of references to Western and the impressive actor play of two protagonists Leo Di Caprio and Brad Pitt, this film oscillates between violence and comedy, action film and melodrama, with a Tarantinesque sauce. In the scene making a hint at his other cinematographic masterpiece Inglorious Bastards, Di Caprio ignites the Nazis during their meeting on the illuminating table of … Pierre Jeanneret!
The choice of furniture quite unexpected, knowing that this table was designed in the 1950s for the University of Chandigarh in India long after the Second World War. But as in all Tarantino’s films, humor, caricature and fiction mix, we let ourselves be carried away by the unique universe created by the director.

Beyond a narrative enriched by Design, some films are a real visual treat. With or without the emblematic pieces of design, these films occupy us, inspire us and make us dream. As the cult phrase by André Barzin claims during the opening of the narrative of Jean Luc Godard’s Contempt (1963) « Cinema replaces our world with a world that matches our desires ».

Cinema or design lovers, we wish you a nice film session! 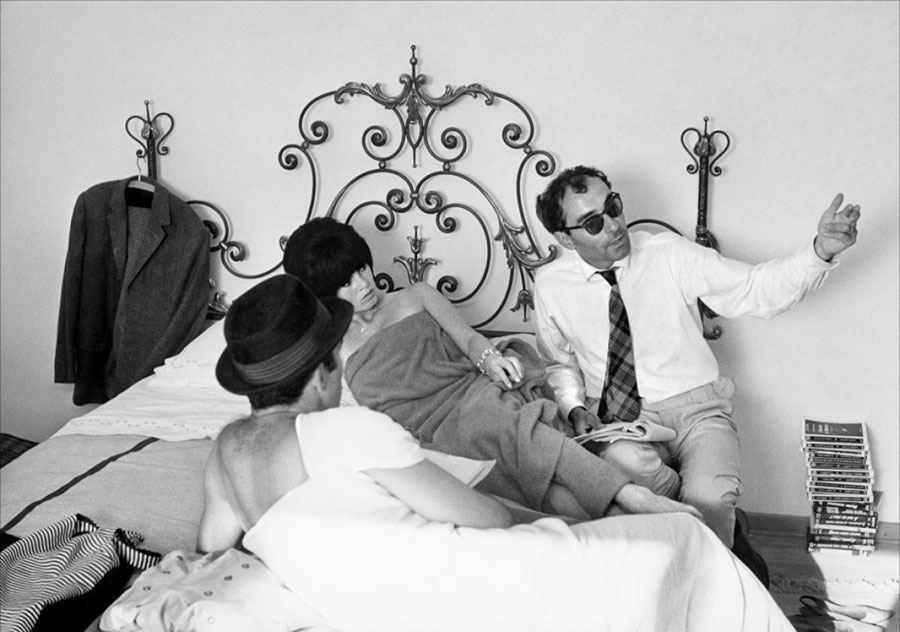