Homes to live in: Part I 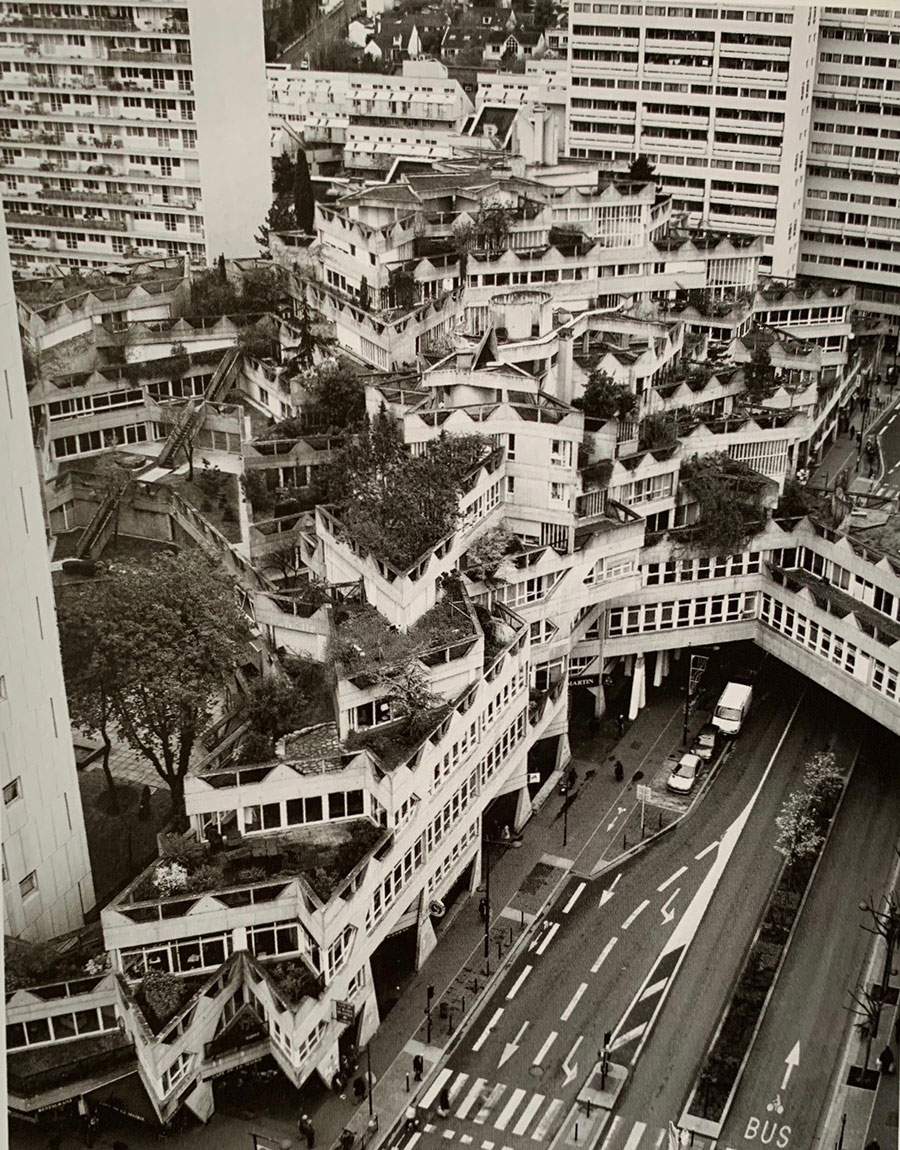 At a time when the megalopolises are developing more and more, when the cities, formerly smaller, become large agglomerations, where the close suburbs end up merging in the big cities, what becomes of our houses?

In the city, each house can sometimes have a specific function and through its architecture it will then be possible to differentiate it from other buildings. 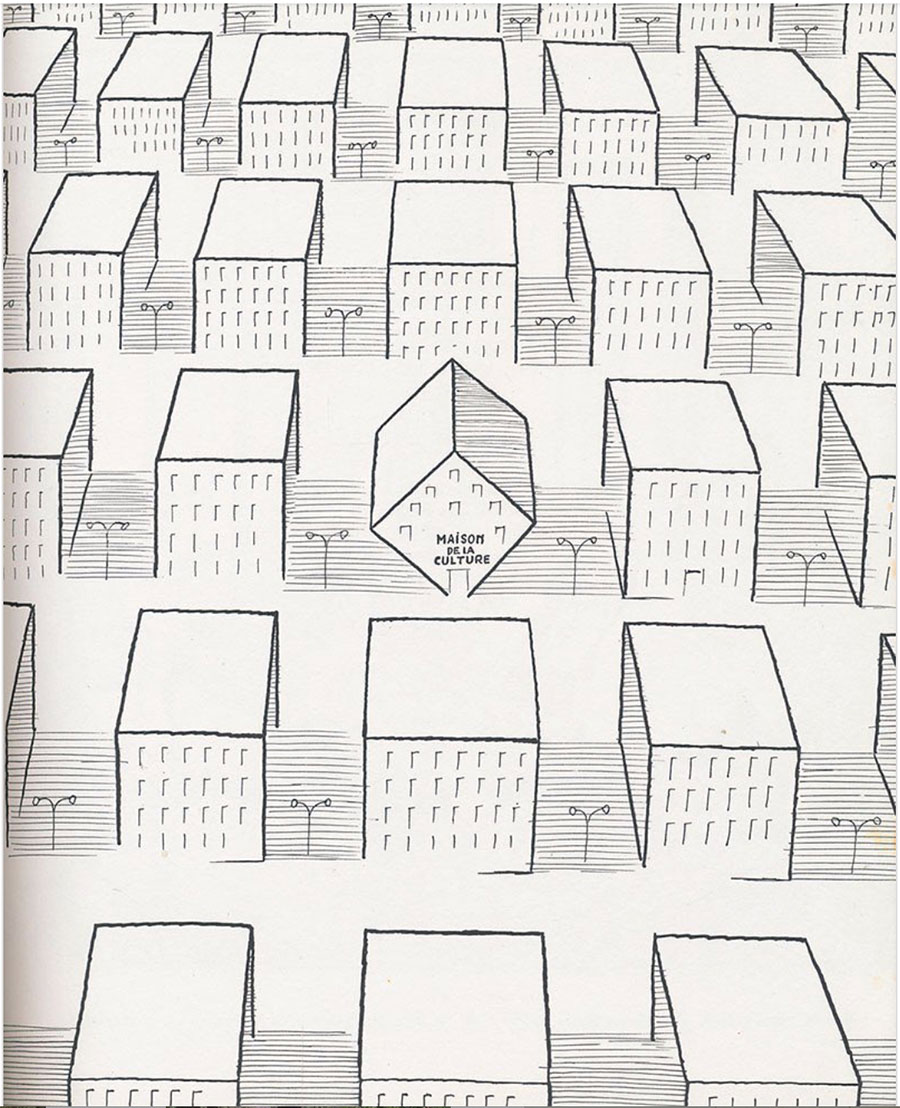 But what is a house? How to build it? How to design it? Over the ages and depending on the country, an architectural style, a proper construction method has developed. Can we classify everything, can we easily recognize them?

Through this journey through architecture, let’s first discover what a house is, and then how was designed over time « the house of tomorrow »! 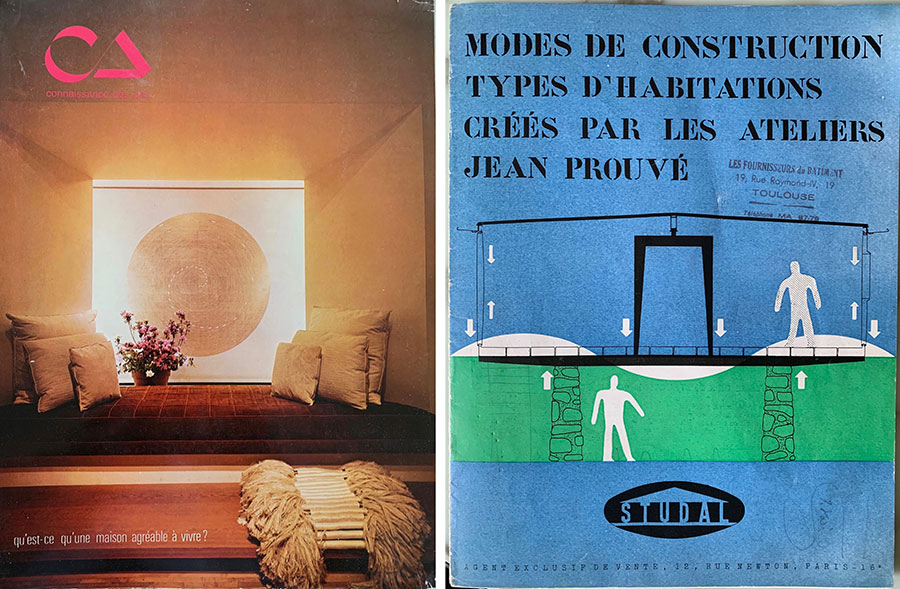 It has always been important, for architects (Lutyens, Wright, Le Corbusier …), constructers (such as Jean Prouvé) to think about a perfect house, depending on the location, a specific order and the epoch … How should this house be? 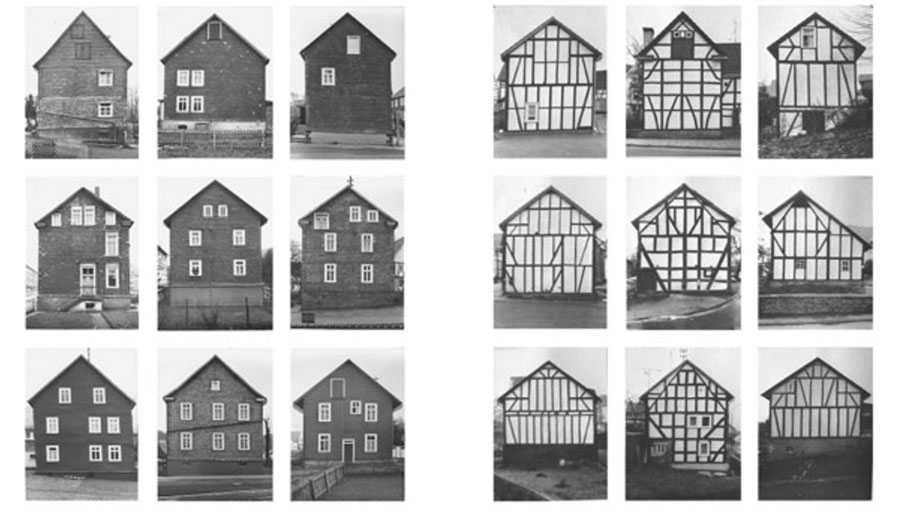 Sometimes the houses look the same, but are they really the same? Can we say that there is a regional, local style where nothing would derogate from the ancestral rule? This research on houses – as on other architectural elements – was carried out by the spouses Hilla and Bernd Becher, founders of the Düsseldorf School. 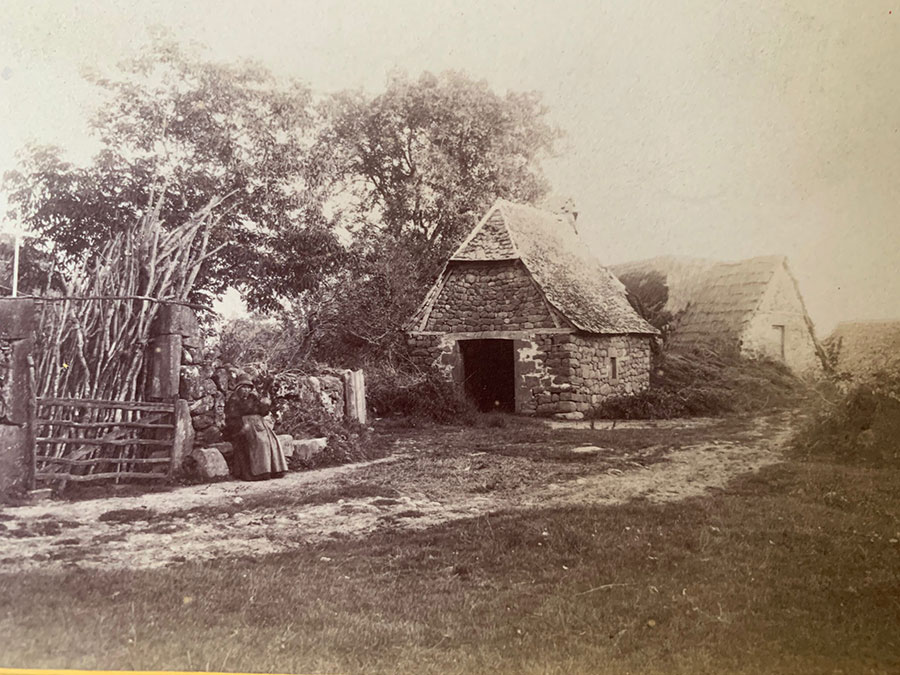 Nevertheless the houses seem so different, between those designed in stone… 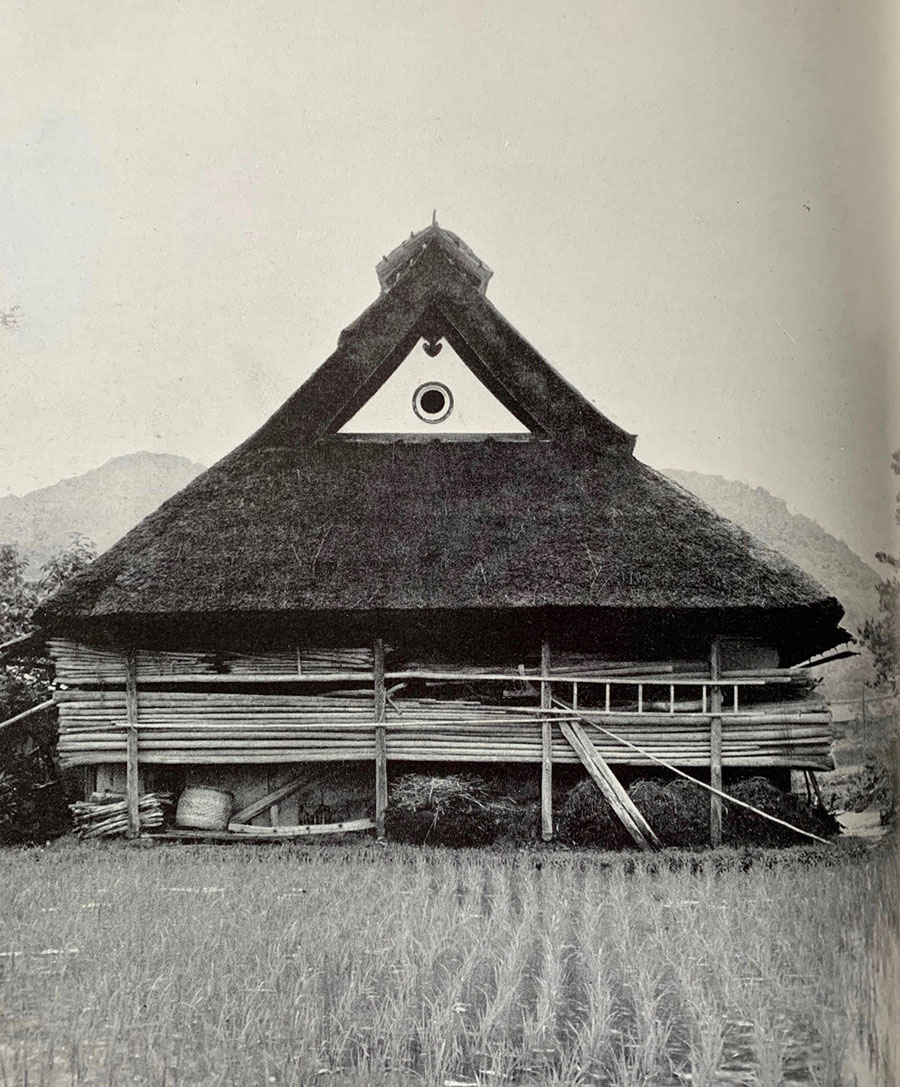 … Or those made of wood and straw! 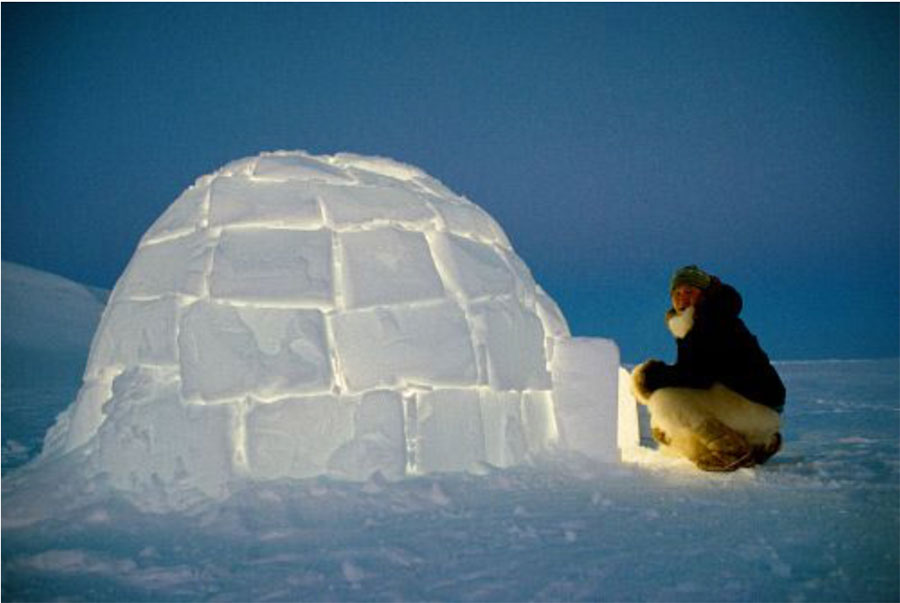 The house can also be made of ICE. Through the centuries, but also from country to country, the house has taken different forms because the climates change, the developments in the countries are different. This famous icehouse, the Igloo, has only been made with one material and has kept this circular shape since the dawn of time! 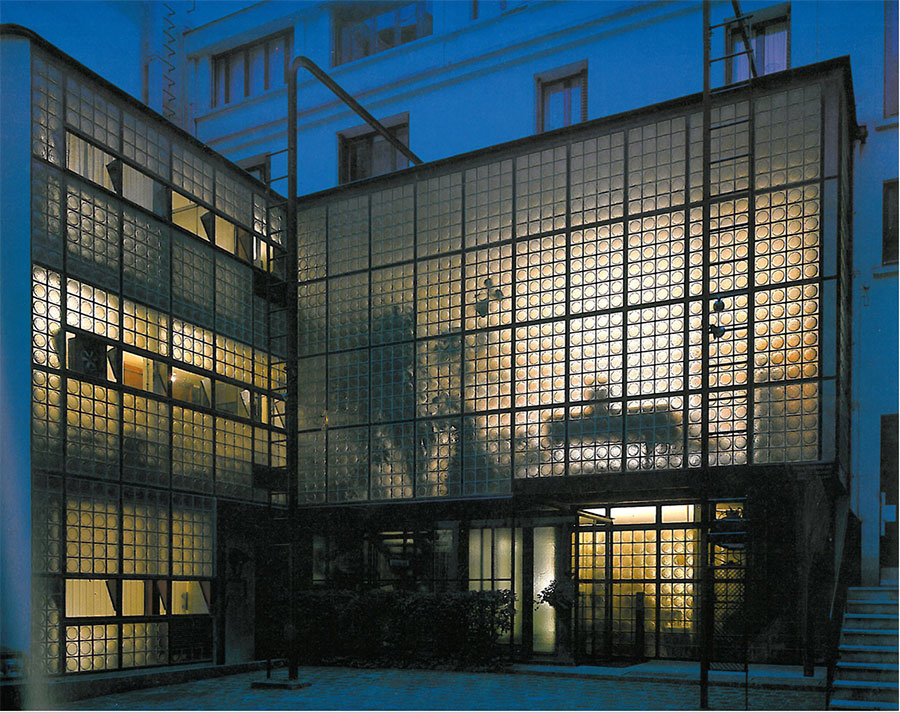 The house can be made of GLASS! It is transparent, minimal, simple but very architectural. From the modernist architecture of Pierre Charreau to the architectural minimalism of Philip Johnson and Mies van Der Rohe, the house is designed to enhance its lightness! Let’s not forget the rare house of Jean Prouvé, built in 1958 with the CIMT. 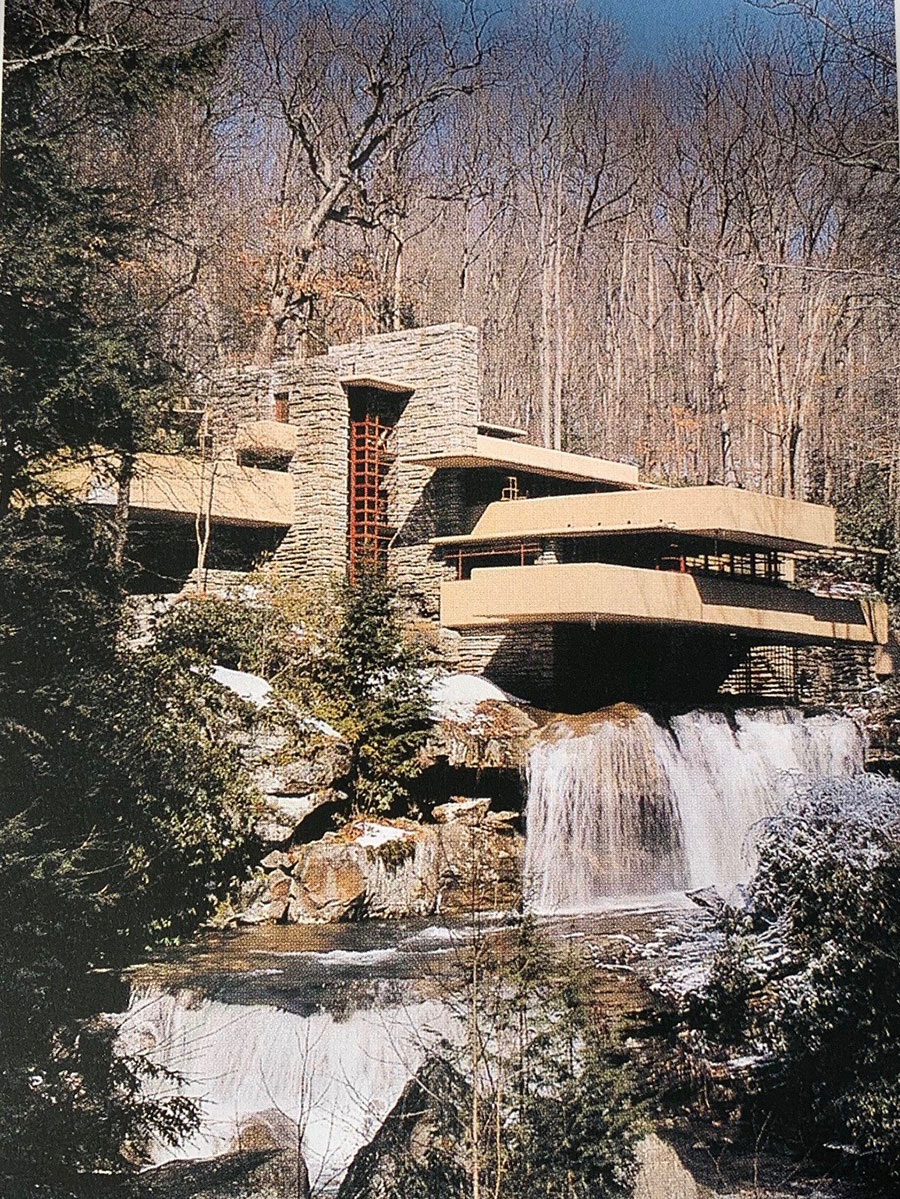 The house can also be made in STONE… The stone means resistance, strength but also attachment to nature and in this case precisely, the architect Frank Lloyd Wright had created this house on the waterfall, for the Kaufmanns, as an architecture that would arise from nature … 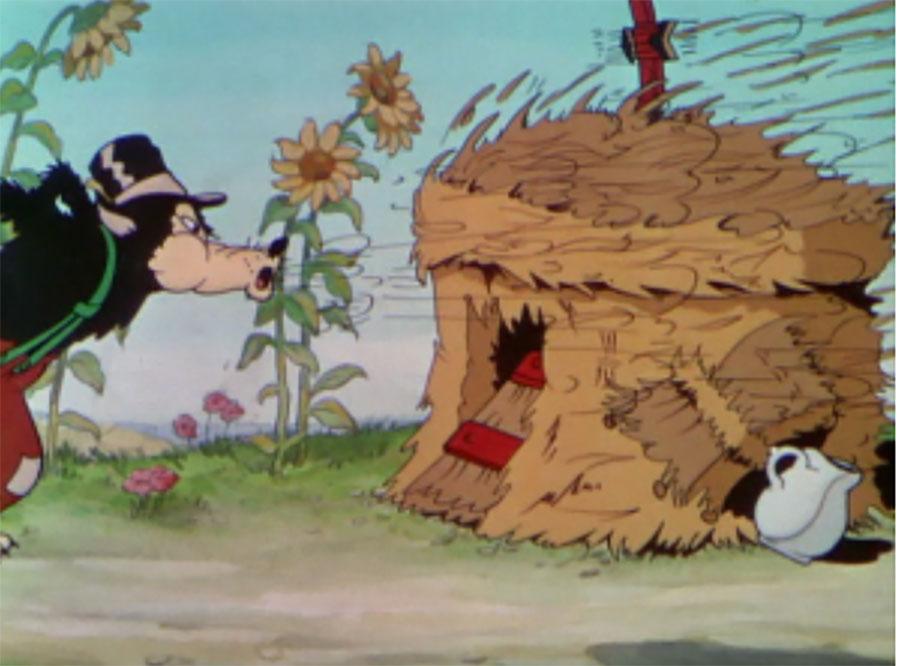 But it is better not built the house in STRAW, it is too risky!

The house made of WOOD! Designed by Le Corbusier for its shed by the sea, the wooden house is an ancestral architecture that dates back to the mists of time! Le Corbusier who, all his life, put forward the use of concrete in architecture, used wood for this house. By this simplified construction, it recalls a principle stated in the 1920s:

What is a house for?
We enter,
We carry out methodical functions
(..) Functional elements can be aligned in one circuit (..)

It is sometimes better that the house is made of BRICKS!

The house is CONCRETE. Material used since antiquity, it is a symbol of resistance in construction! Reappearing essentially in the 19th century, Le Corbusier put it forward in 1933 in his Athens Charter, indicating that concrete is a material that does not cheat. Concrete mainly generates geometric shapes, often in light colors. 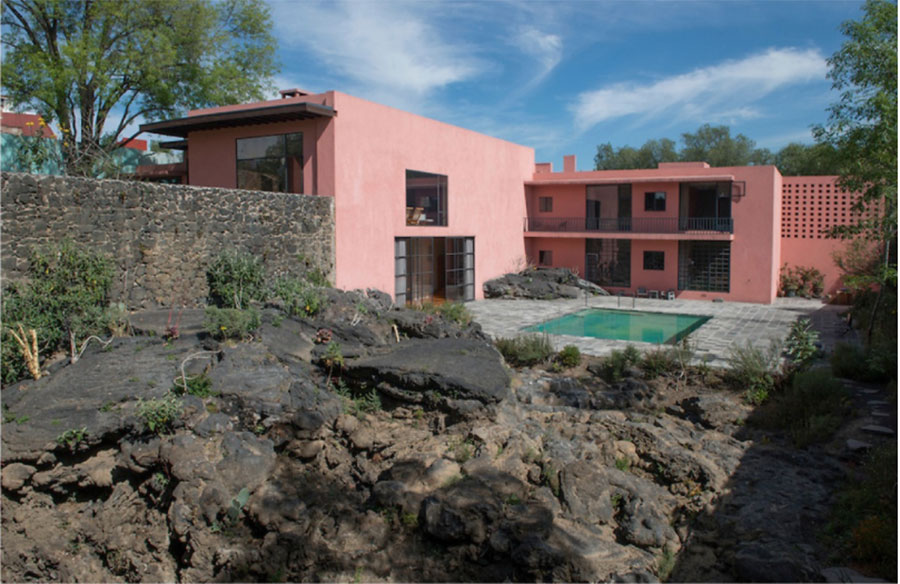 However, concrete is sometimes COLORED! The Mexican architect Luis Barragan quickly understood the power of colorful appearance! In Mexico, color has always been the rule in crafts. From this stems the use of color by Luis Barragan for more rhythm in the spaces! But let’s not forget Ettore Sottsass too.

The house can be GEOMETRIC and MINIMAL, with perfect geometry, even! The modern world of the 20s and 30s sees the development in Europe of different schools of architecture which have this common point of purifying architecture of any decor which would appear superfluous!

The origin of this principle could be written by Adolf Loos in Crimes and Ornaments in 1908 … The architecture therefore becomes a succession of cubes, squares, perfect rectangles which intelligently fit together and form this modern vision of the world! From Robert Mallet-Stevens to Walter Gropius, via Théo van Doesburg, we discover this change over a too short period of 20 years. 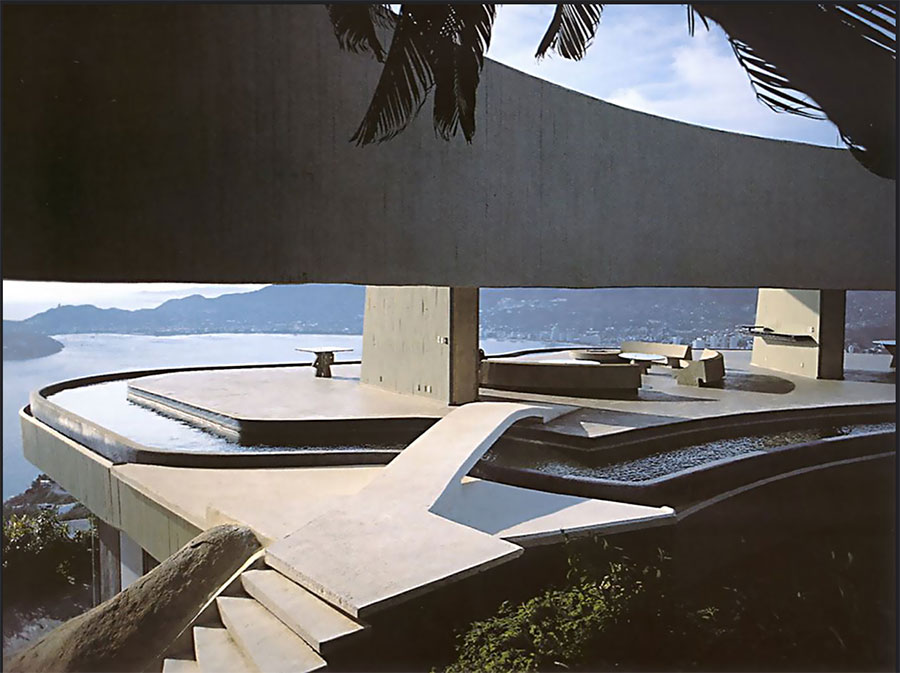 The house may have a FREE SHAPE plan. This architecture will be developed in different ways, by architects like Lautner, Niemeyer … In the case of Casa Arango, designed in 1972 by John Lautner, in Acapulco (Mexico), the house is detached from the rock to offer a breathtaking view of the Acapulco bay! The shape therefore adapts to the natural space of the place. 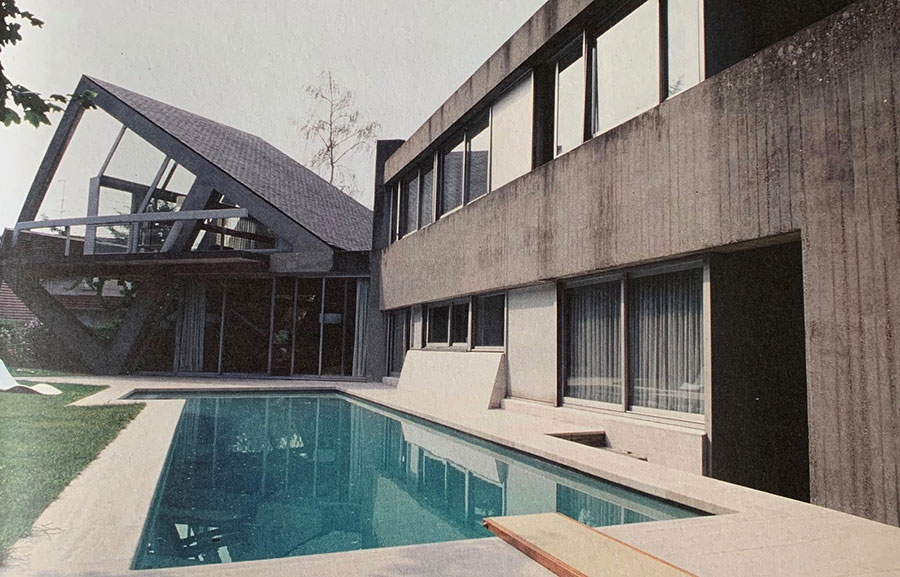 The house plan can be DECONSTRUCTED! The traditional way of building a house is to put your plan on a flat surface, on the ground! Some architects will think, during the years 60-70, to transform, even adapt the angle of construction of a house. Claude Parent developed in France the idea of an oblique construction which he would use for a new contemporary architecture. This will be the case for certain private houses, such as Maison Drusch in 1963, and then for certain hypermarkets! 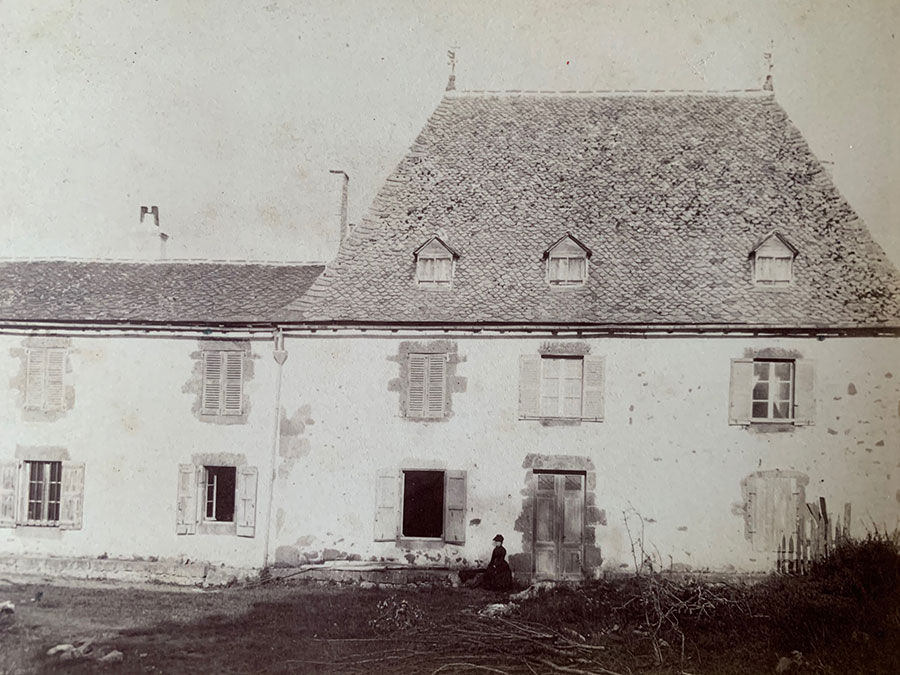 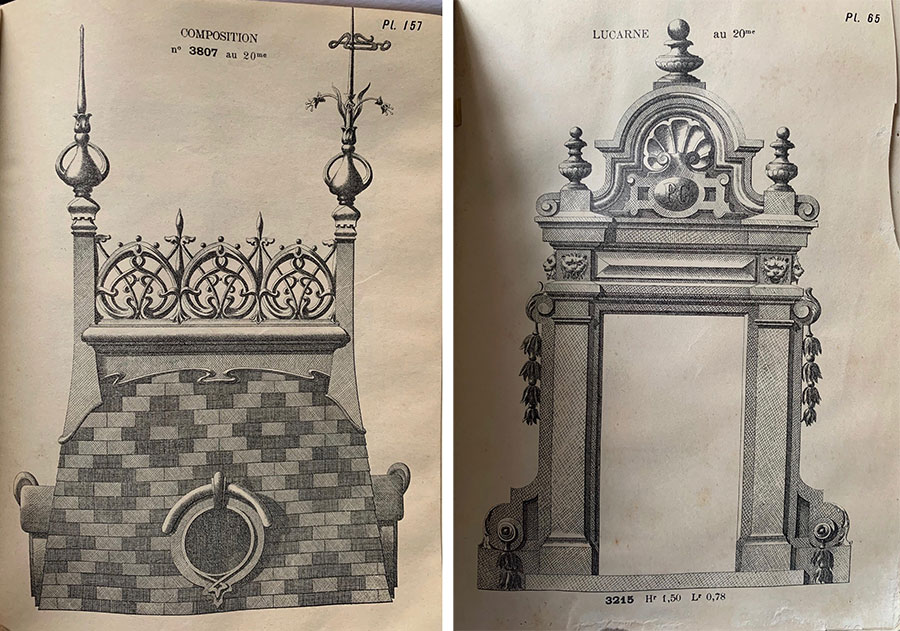 The house can also be – or partially – PREFABRICATED. With the development of the economy throughout the XIXth century, the construction needs to simplify the process with the production of elements in series; these elements become standard.
During the 20th century, prefabrication has developed… 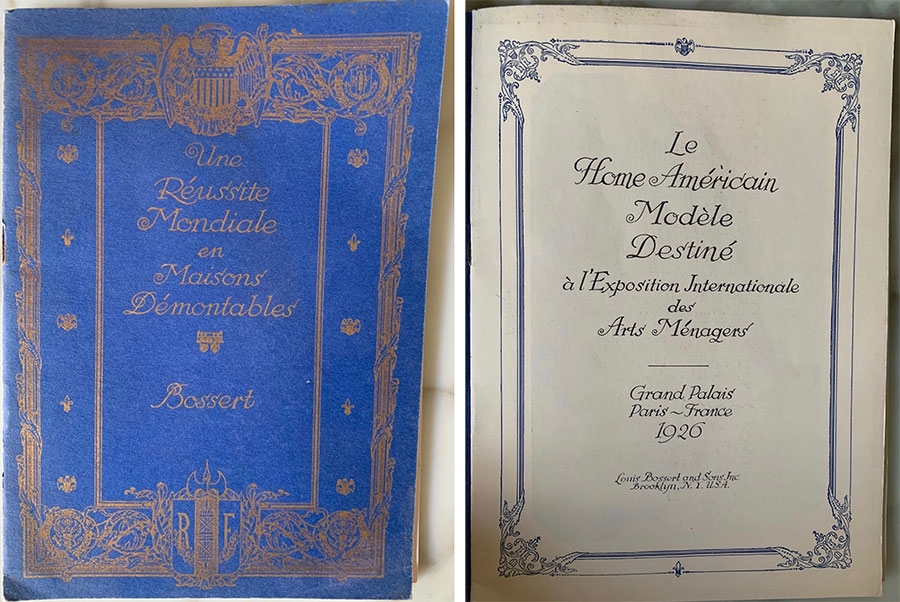 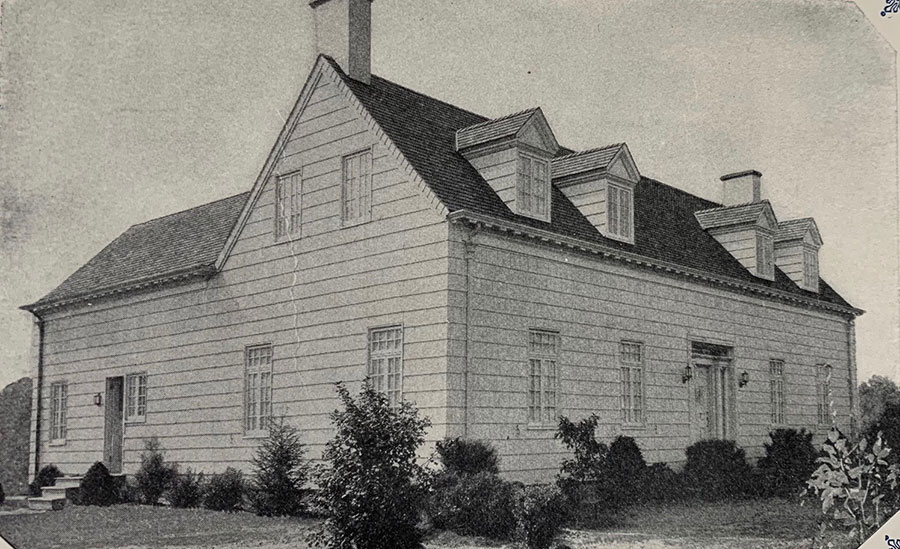 After the First World War, and due to necessity of reconstruction, one of the first models of demountable houses is imported from the US. It will be exhibited in 1926 at the first Salon des Arts Ménagers. It is a question of developing a new economy of production of standardized elements and of rapidly rebuilding housing groups in disaster zones. 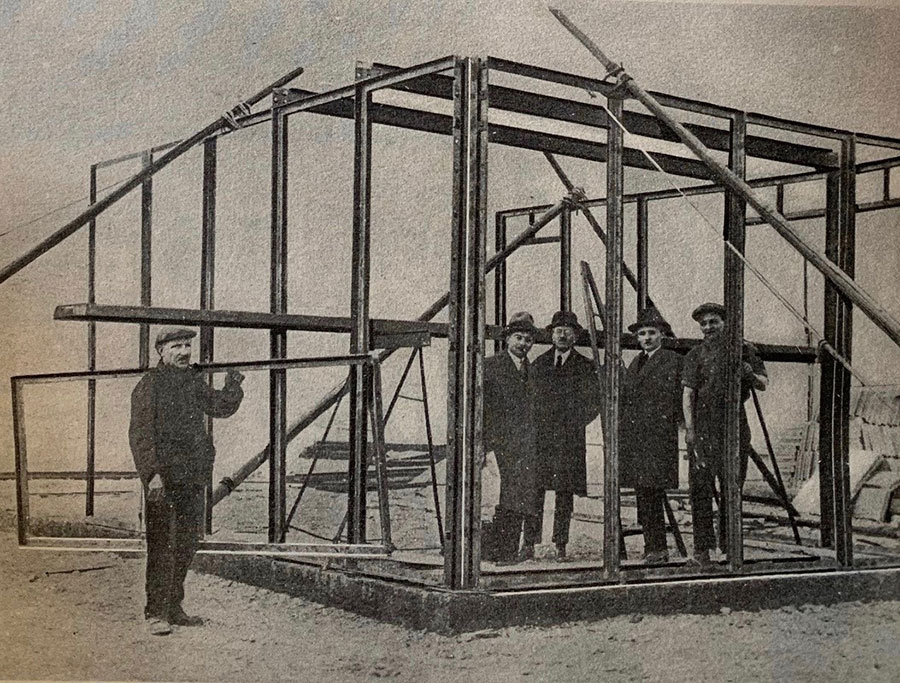 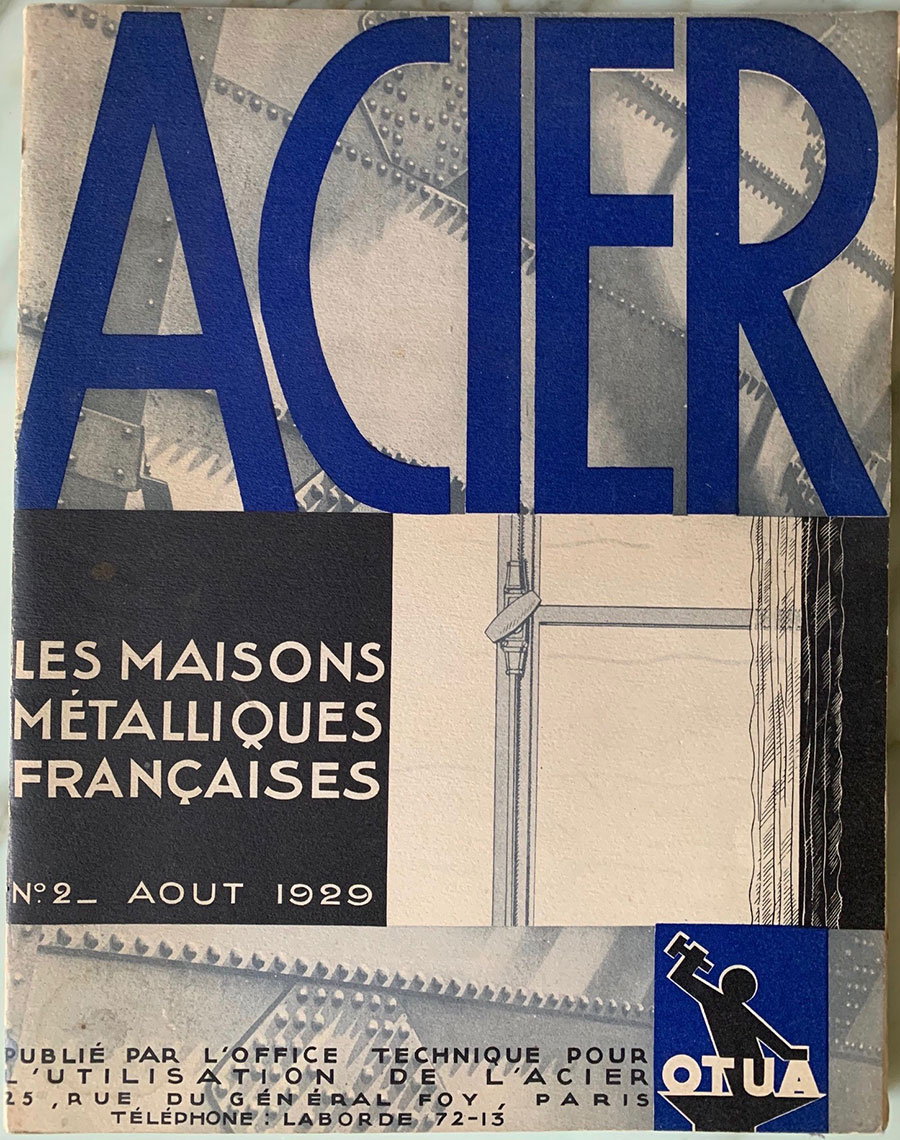 In the 1920s, architects close to the modern movements in Europe – France (Union of Modern Artists), Germany (Bauhaus) etc. – think about the standardization of construction elements to make metal houses in series! Architects like Urbain Cassan are developing these ideas in an innovative group: the Technical Office for the Use of Steel (OTUA) which works on the concept of metal houses, presented by the journal ACIER. 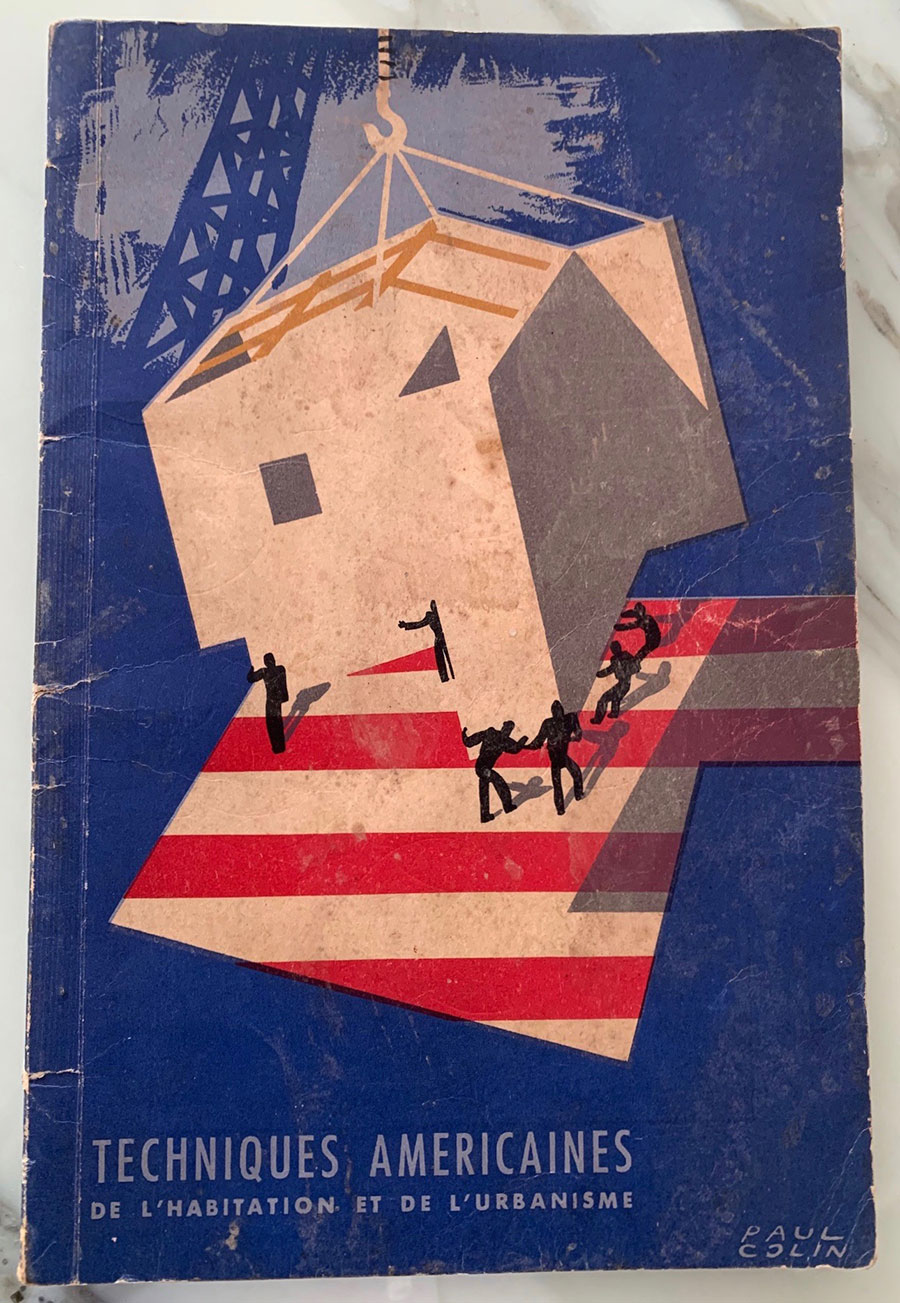 In the aftermath of the Second World War, the USA again brought its various techniques and methods for the development of prefabrication. These elements have existed for some since the Chicago School! 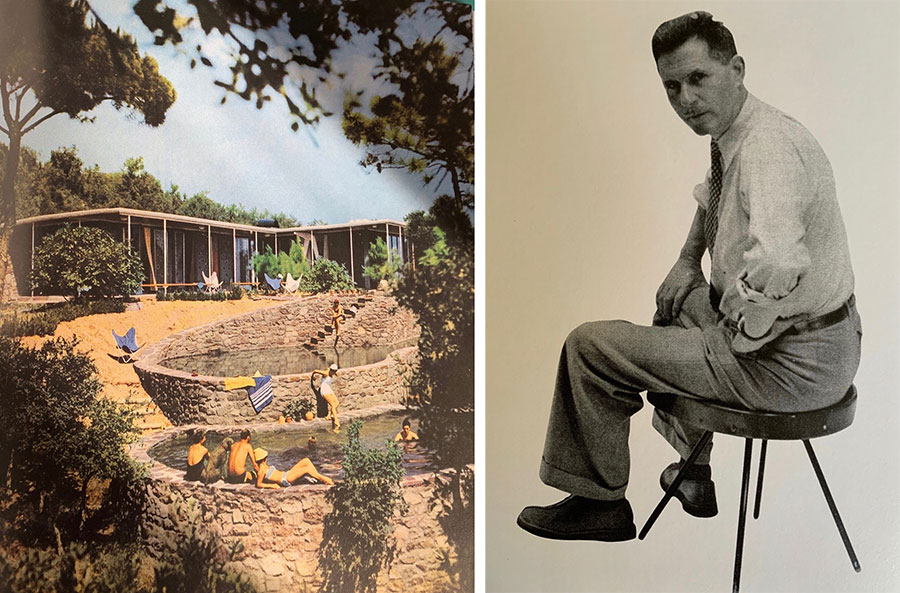 One of the masters of prefabrication in France, during the 20th century, was Jean Prouvé.
He worked all his life on the development of « manufactured homes ». From the BLPS holiday home, presented in 1939 at the Salon des Arts Ménagers, to the construction of “la Maison de Jours Meilleurs”, in 1956, Jean Prouvé developed different construction models based on a self-supporting structure, composed of standard elements made serial! 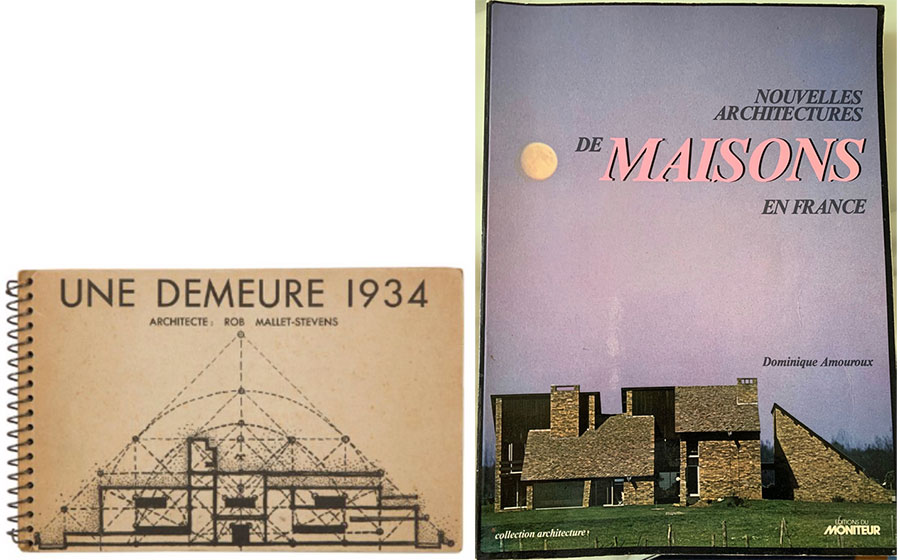 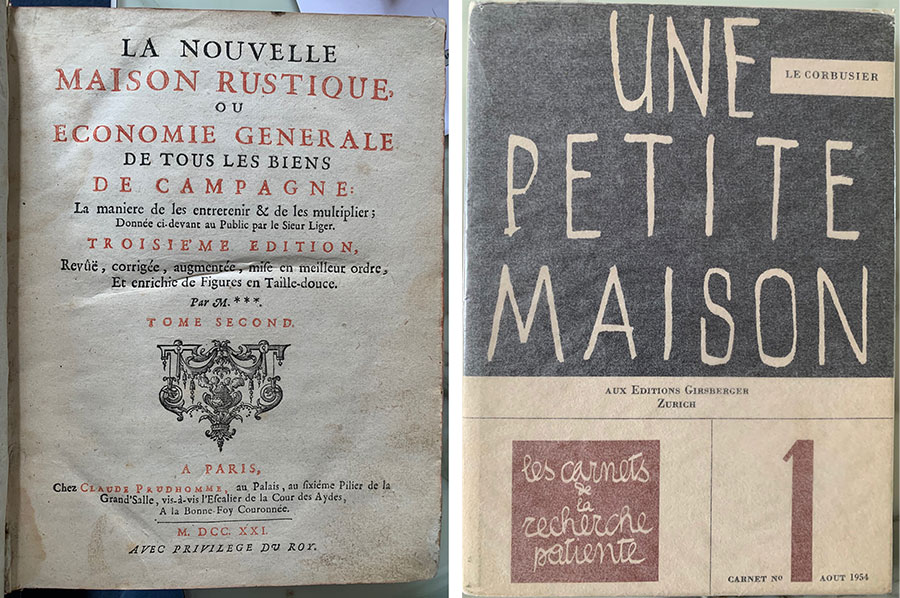 … Let’s not forget the many essays, books, exhibitions and writings on the houses!

Inquiry: Homes to live in: Part I