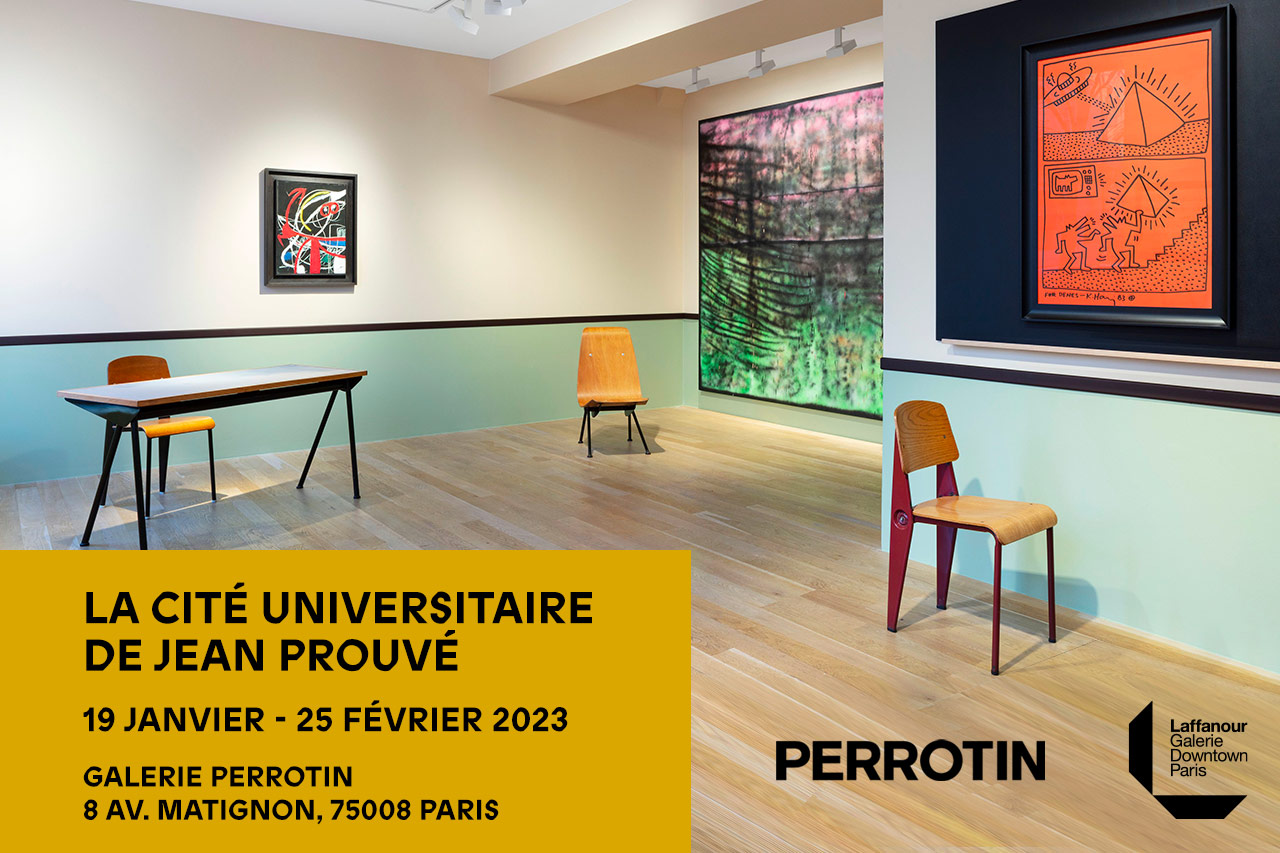 Perrotin Matignon is pleased to present La Cité Universitaire by Jean Prouvé, an exhibition created in collaboration with gallery Down- town/François Laffanour. Designed for university residences, Jean Prouvé’s iconic creations are displayed alongside a daring collection of secondary market works that interrogate the academic world and its environment.

An emblematic figure of the modernist adventure in the 20th century, Jean Prouvé (1901-1984) was a Nancy-based architect, engineer, builder, and designer. Committed to the social reflections of the post-war period, he conceived practical yet elegant furniture that aimed to combine art and industry. His functional and humanistic approach made his creations accessible to everyone. After starting out in art metalwork— producing remarkable staircases, lamps, elevator shafts, and door ironwork—he soon turned to architectural construction following the discovery of wel- ding and stainless steel. Jean Prouvé was guided by the constructive principle: “there is no difference between building a house and making a piece of furniture”. His edifices and furniture leave their systems of articu- lation and assembly visible, revealing the colliding forces within them. An example is his standard chair “in the form of equal resistance”, whose legs are designed not to break when the sitter swings back and forth.
The post-war context prompted France to find innovative solutions for equipping university residences—the most common type of housing for French students at the time. The Cités Universitaires occupy a central place among the major projects undertaken by Jean Prouvé. He first designed the furniture for seventy rooms at the Cité Universitaire Mon- bois in Nancy in 1933 combining modernity, sobriety, and ergonomics, before furnishing the law faculty at the University of Aix-Marseille in 1952. The “Jean Zay” university residence in Antony, near Paris, was designed between 1954 and 1955 in a particularly modern “American” style, invol- ving several designers and architects, including Jean Prouvé. In addition to the common rooms and the cafeteria, he designed 148 rooms as simple sets with a symmetrical arrangement of beds, chairs, and desks. The «Antony» series would become the emblem of this project: simple, economical furniture that could stand the test of time—and the students.

In the reinterpretation of this universe at 8 Avenue Matignon, the realm of graffiti evoked by Keith Haring’s (1958-1990) and Sterling Ruby’s (1972) works establishes a link with Alighiero Boetti’s (1940-1994) embroide- ries—key pieces of Italian post-war art at the crossroads between writing and geometry. Fernand Léger’s (1881-1955) fascination for urbanism is revealed in landscapes filled with new forms, while in Peter Halley’s (1953) work the city of New York with its complex and cellular geography becomes the field of research. The exhibition is complemented by KAWS’s (1974) and Yoshitomo Nara’s (1959) works, whose at times whimsical, at times playful nature echoes comic book characters.